The Duke of Edinburgh pub on Ferndale Road has warned that a campaign to impose what it says are “unreasonable” licence restrictions on it could threaten its existence after almost 160 years of trading.

The pub is a member of the Brixton Business Improvement District (BID) which said: “With pubs currently closing at a rate of 18 per week across London, let’s find a solution without putting the Duke of Edinburgh under threat of closure.”

Some local residents are complaining of noise, obstruction and general nuisance from the pub and its customers, and have organised a set of objections to a licensing application by the pub’s operators which will be decided by Lambeth council. The objectors say they are not opposed to the application in principle, but want to see certain sections of it amended.

The Duke of Edinburgh was built in 1860. A Grade II listed building famous for its large garden, its current licensing conditions, which date from 1937, include the possibility of opening as early as 7am seven days a week, although the pub has never done so.

The pub currently closes at 1am on Fridays and Saturdays, although its current licence would allow it to remain open until 2am with a licence for live and recorded music through all these times and the ability to provide “late night refreshment” until 3am.

Campaigners say 7am is too early for a pub in a residential area to open and that its licence should only allow it to open at noon and close at 11pm. Rose Pubs, the operators of The Duke of Edinburgh, currently open it at 3pm on weekdays and 12 noon at the weekend.

The pub says that it closes its doors each night at 11pm on weeknights and 1am on Friday and Saturday in consideration of its neighbours.

The application would enable the pub to retain current licensing conditions.

The campaigners’ objections include noise and nuisance, public urination outside the pub, queues that block pavements and incidents in which pub customers have stood on tables or chairs to lean over garden walls and abuse people living next to the pub’s garden.

They say that they have had one meeting with management of the Duke of Edinburgh,
but that their concerns have not been taken into account in the licensing application. 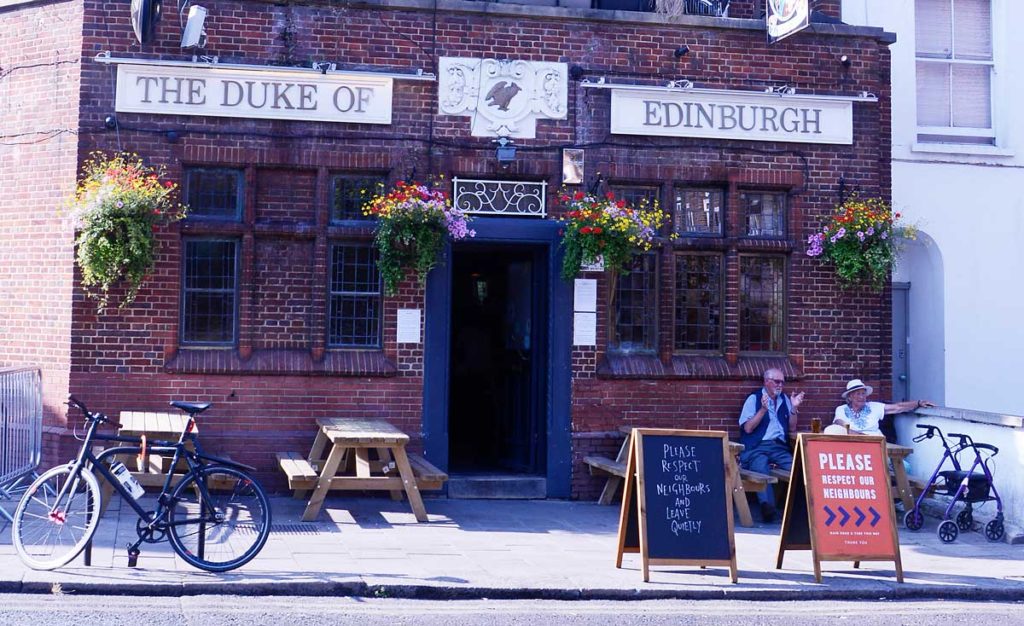 They also have strong objections to the use of large screens in the garden to show sport events.

Brixton BID said that live music and DJs were not a consistent feature of the pub and that neither were outdoor event screenings – they had been used primarily to celebrate the men’s football world cup last year.

It pointed out that the pub was not being accused of infringing on sound levels that can be monitored by the local authority.

The BID said the pub is “a vital community resource for members of the South American footballing community from Stockwell”.

It also had “a known history of complying with licensing conditions imposed by the local authority and is committed to making this area of Brixton safe for all, inclusive of residents and customers”.

“The Duke of Edinburgh has a rigorous and effective dispersal policy in place with security staff leading customers away from the area quickly after closure, followed by litter picking to clean the area of the remnants of night-time festivities.

“With pubs currently closing at a rate of 18 per week across London, let’s find a solution without putting the Duke of Edinburgh under threat of closure.”

Publican Stevie Mulgrave said: “We have reached out to this pocket of residents numerous times within the process and they have opted not to take that opportunity, preferring to bring this to a committee.

“I would like to make clear that this is a small group of residents in opposition.”

The objectors say that 29 residents have signed the letter seeking changes to the licensing application.

Mulgrave said the pub had “overwhelming support from people in the Lambeth area and notably neighbours who live directly by the pub for many years.

“Many of the residents can see the efforts we make with litter picking, no entertainment in the garden, closing the garden at 9.30 – an hour before the licence stipulates and earlier than other surrounding  pubs with beer gardens – added to quick dispersal  of customers on Ferndale Road.

“The area has changed, with Ferndale Road being used as a thoroughfare from Clapham to Brixton for many people, and we have responded to that to keep the area clean and trouble free.

“We absolutely do not intend to extend our opening hours.”

Comments on the application close tomorrow (14 August). It can be found on this page of the Lambeth council website.