Central government has told Lambeth council that it must cooperate with a proposal to transfer the demolition-threatened Cressingham Gardens to an organisation of residents.

It announced today (10 July) that it has overruled council objections – made in September 2016 – that the plan would have a “detrimental effect” on regeneration of the area.

The announcement was welcomed by campaigners as the start of a long and staged process to transfer the estate to community ownership.

A Lambeth council spokesperson said: “This announcement was based on information submitted in 2016 and we will need time to consider the implications.

“We are, however, pleased that the government has recognised the council’s plans to rebuild the estate will have a ‘positive impact on the area covered by the estate’ and we remain committed to rebuilding Cressingham Gardens to provide better homes for existing residents and more homes for people on the council house waiting list.”

In April 2016 the Cressingham Gardens Community (CGC) organisation asked the council to consider transferring the estate to an organisation run by its residents. 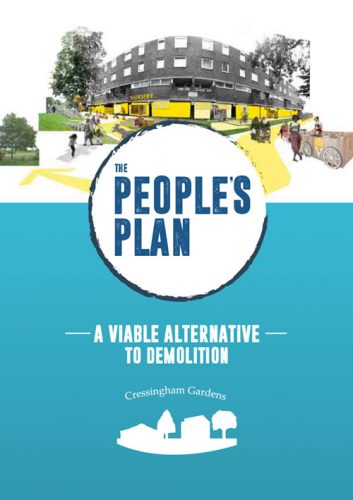 This was part of the “People’s Plan” for the estate – a thoroughly researched and detailed alternative to the council’s scheme to demolish and rebuild the entire estate near the top of Tulse Hill that overlooks Brockwell Park.

The council was quick to reject this plan. It also asked the central government housing ministry for a “determination” saying that the residents’ transfer plan would “have a significant detrimental effect on the regeneration of the area”.

But housing minister Kit Malthouse today told the council that he agreed with a report written for the government that rejects the council’s view of the transfer application.

“The outcome of my determination … is that the stock transfer process in relation to the CGC should continue,” he told the council.

Cressingham Gardens Community Ltd is a company set up in August 2014 by Gerlinde Gniewosz, a leading campaigner against the demolition plans, and other estate residents.

The report on which the minister based his decision was completed in December 2017, but there is no explanation why the government took so long to announce its decision.

Cressingham Gardens campaigner Jo Parkes said: “Residents worked extremely hard to develop the People’s Plan to find a way of improving the estate in a way that is both sustainable and as something that the whole Cressingham Gardens community can get behind.

“So we are obviously delighted that the government has rejected Lambeth’s accusation that our proposals would be detrimental.

“The government report also notes that Lambeth did not provide evidence to back up its claim.

“We can now move forward with our proposal to transfer the estate into community ownership – this is the start of a long and staged process.

“Next steps will involve feasibility work, further development of the business plan and a ballot of residents.

“Similar to our use of right to manage legislation, it will only happen if residents want it to, and we are looking forward to eventually balloting residents on how to proceed with the proposed transfer.

“After residents voted overwhelmingly to take over some of the management of Cressingham Gardens last year, we have recently appointed a new estate director.

“We are very much looking forward to him overseeing a much improved repairs and maintenance system on the estate, starting in the coming months.”

The Housing (Right to Transfer from a Local Authority Landlord) (England) Regulations 2013 require local authorities to co-operate with a group of tenants who wish to explore transferring their housing stock to a new social landlord, and then to arrange a transfer if proposals are supported by a majority of tenants voting in favour in a ballot.

The regulations allow a local authority to apply to the government for a “determination” to halt the process if it believes the transfer would have a “significant detrimental effect” on their housing services or local regeneration.

The report prepared for the government by Peter Brett Associates and dated December 2017 says that the council “has made little concrete progress” towards estate regeneration and that the Cressingham estate represents only about 1% of the council’s housing stock.

Download the ruling and the report on which it is based.

Can you shoot a film in 48 hours for Herne Hill...