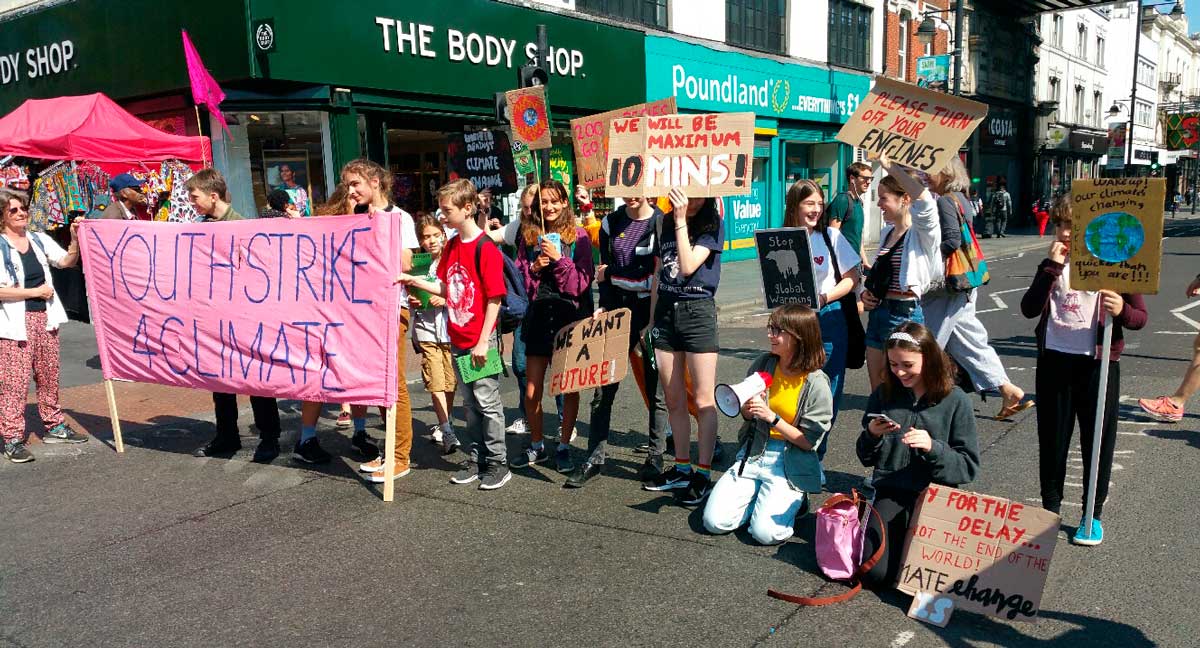 Ray Branford, age 9 and her grandmother Sue Branford were on their way to Parliament for the School Strike for Climate, when they stopped off to report on the blockade of Brixton Road.

Brixton Road, just outside the Underground station a well known bottleneck, and people deliberately making the congestion worse, if only for a short while, can’t expect to be made welcome.

Sam Riddy, 14, (left) who goes to Charter school, said: “Everyone knows the solutions to the problem, but no one is implementing those solutions. For instance, we have the US president claiming that statistics gathered by a branch of his own government, NASA, are a hoax, which doesn’t help the problem and it’s a bit of a ploy to stop people worrying. We need to stop that and actually get people to worry if we’re going to solve this.”

Several of the children said that Greta Thunberg, the young Swedish activist, had been an inspiration. Saying they had been told that they could legally stop traffic for seven minutes and no more, the children blocked each side of the road two or three times, each time for seven minutes, carefully timed on their phones. Many passers-by showed interest and a few expressed support, but the dominant reaction was one of hostility.

A few men shouted quite aggressively at the children, saying that they were trying to get to work and the children’s action was selfish. Though clearly startled, the children remained calm. The action was timed to coincide with a much larger protest organised on the same day in front of Parliament by the School Strike for Climate, an international movement of youngsters who have decided not to go to school one day a month until much more effective action to prevent further global warming and climate change is taken by the authorities.

The children in Brixton said they wanted to spread the message outside central London. Many of the children joined the bigger march later. We saw Sam Riddy, equipped with a loudspeaker, striding up and down the march for hours, shouting out slogans for the youngsters to repeat. “The oceans are rising and so are we.”

AFTER THE RIOTS: Brixton one year on

Over 20,000 children in Lambeth exposed to unsafe levels of pollution

Girl, 12, hit by a train at Brixton Tube station