Today (17 April) is the 20th anniversary of the Brixton nail bomb attack that was the first of three over a two-week period that killed three people in Soho and injured dozens of others.

Nearly 48 people were injured in the Brixton blast on a Saturday afternoon.

David Copland was sentenced to six terms of life imprisonment in June 2000 after being found guilty of three counts of murder and for planting the homemade devices.

The event will be marked tonight at the spot the bomb was planted outside Iceland.

The 17-24-30 National Hate Crime Awareness Week organisation – named for the dates of the three bombings – is asking people to arrive at the shop on Electric Avenue in Brixton by 5.45pm for a ceremony that will start at 6 pm. 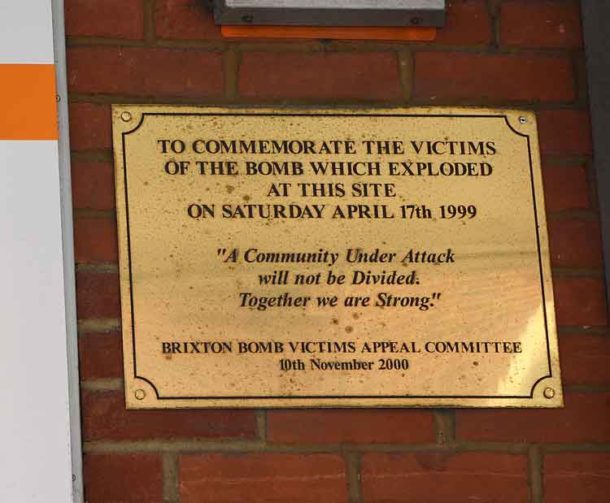 Three candles will represent the three people who died and the three communities that were attacked.

Organisers will hand out hate crime reporting cards and information and plan to talk to passers-by about their experiences.

In a statement marking the anniversary, the Metropolitan Police said that there would be a series of community events over the next two weeks at which victims of the attacks will be commemorated.

Commander Mark McEwan said: “Two decades have passed since these abhorrent attacks which left an indelible mark on London.

“London’s Black, Asian and gay communities were the target of these bombs, but they were an affront to London as a whole, and to the diversity and unity which characterises this great city.

“The anniversary of these atrocities serve as a reminder that we can never be complacent in dealing with extremism and people who harbour radical views based on racial, religious and other forms of prejudice.

“The Met’s priority is to keep the public safe, and we do not tolerate any criminality motivated by hate.”

Commander McEwan said the police were working round the clock to London safe from terrorism – “from patrolling key areas to delivering training and advice to businesses through our ground-breaking elearning package ACT (action counters terrorism) Awareness.

“We cannot do this alone however, so I urge the public to help by reporting anyone or anything that looks out of place or suspicious to a member of staff, security or police.”

Anyone with concerns can report anything suspicious confidentially at www.gov.uk/ACT or by calling 0800 789 321. In an emergency always call 999.

More information on what to look out for and how to contact police can be found at www.gov.uk/ACT.