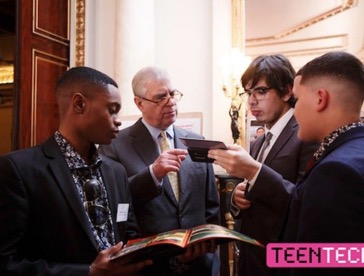 Pupils and their computer science teacher from Brixton’s Ark Evelyn Grace Academy received Teen Tech’s “best innovative product” and “teacher of the year” awards at a ceremony at Buckingham Palace.

Pupils Bruno Rocha Cunha E Silva, Charles Clayton and Leynner Caicedo Arrieche (known as The Alpha Apps) received their awards in the music, media and entertainment category for The Augmented Reality Comic Book – a physical comic book with an app that generates a videogame.

“I am incredibly proud of what The AlphaApps have achieved.

They weren’t successful in their first year at the TeenTech Awards, but were determined to win in their second year with an entirely new idea.

“Not only did they win, but they’ve now got a real business out of their project.”

Brixton prepares for the best of break dance