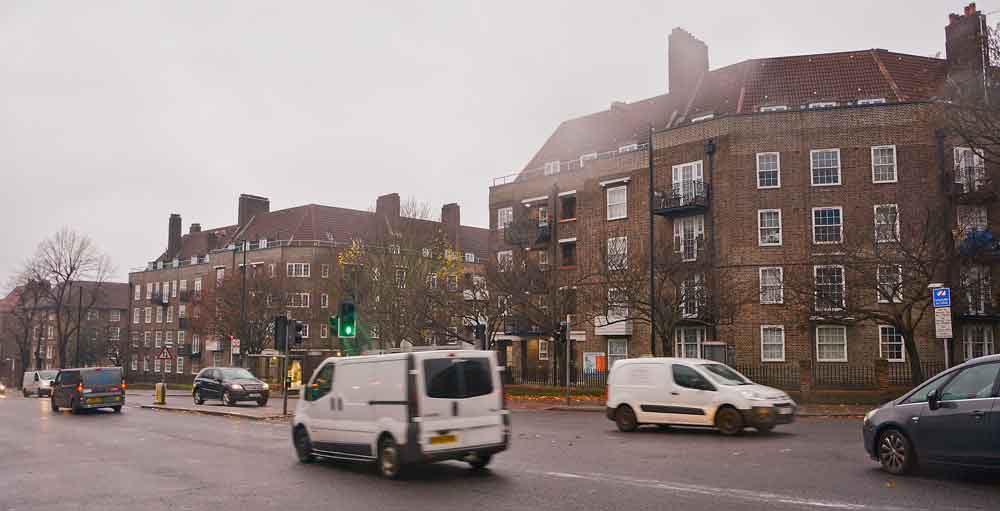 Tenants facing eviction from the Clapham Park estate in the new year mounted a noisy protest outside the office of the Metropolitan housing association yesterday (23 November).

Metropolitan, which manages the 1,400-flat estate, is set on clearing out its short-term tenants as part of a massive regeneration scheme that it says will create up to 3,000 new homes.

The flats with the “assured shorthold” tenancies are in buildings scheduled for demolition or rebuilding under the scheme. Of the 60 families to be affected, nearly half have left already, leaving 32 families to have a miserable Christmas with the prospect of having to find homes in the private sector at extortionate rents.

Together with around 50 local supporters, they demonstrated outside Metropolitan’s admin office in Atkins Road, opposite the estate, chanting “Metropolitan made us homeless” and “Metropolitan keep your promises!”

All have had “possession orders” granted against them by the courts, which Metropolitan has said it will enforce at the end of January.

“We are just waiting for the bailiffs”, said Florentina Narcso, who has lived at Clapham Park for seven years. “We have kept the flat in good condition and put in a new floor but they still got an eviction order against us.”

Her fellow campaigner Ramona Cirstea said she had been working hard to find a secondary school for her 10-year-old son Alex for next year but now, she said, “we won’t be here. They want us out. They haven’t offered anywhere to live – just a payment of £6,300.

“That might pay the deposit for a private rental but we wouldn’t be able to afford the rent. Letting agencies won’t even let you register if you don’t earn £45,000 a year.”

The £6,300 is the legal minimum the housing association is obliged to pay, and tenants claim that some who have already gone were paid much less.

The protesters made three demands of Metropolitan, that it:

The housing association, recently rebranded as Metropolitan Thames Valley Housing (MTVH) after a merger, said the non-secure tenancies had been granted to stop flats standing empty, and residents were told they would not be permanent.

“We understand that this is a difficult time for them and are working to rehouse them wherever possible. Properties that become available in Lambeth will be offered but are limited in number, so we are also providing support in the form of £6,300 per household.

“Eviction is the absolute last resort and we are taking all possible steps to avoid it.”