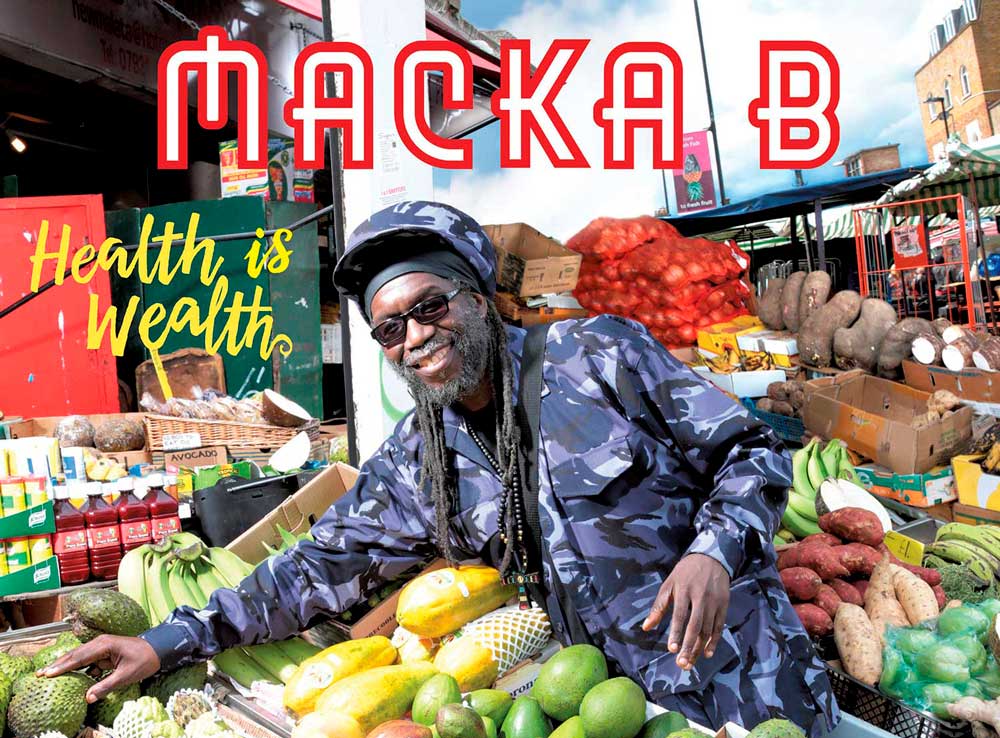 In this season of harvest festivals it feels fitting to join reggae legend and internet sensation Macka B for an Ital musical feast. Macka B will be playing at Brixton’s Jamm on Thursday 18 October.

For more than 30 years the conscious lyrical chef has served up dancehall delights and uplifted minds. Born in Wolverhampton, he became a rising star of the Birmingham scene after starting the Exodus sound system and performing with Wasifa Sound.

His first album Sign of the Times came out on Mad Professor’s Ariwa label in 1986 and he has continued to comment on social, political and spiritual issues ever since. In 1990 he declared his “Pride In Mandela” and performed for the pro-democracy workers’ movement Solidarity in Poland

He has spoken about gentrification, the importance of community and the tragedy of lives lost to gang violence. But it is his advocacy of natural, plant-based food that has really taken root and delivered a bumper crop of new fans.

As a long-time Rastafarian it’s no surprise that Macka B chooses Ital food. What did surprise many was what happened after his children encouraged him to use a series of online videos called “Medical Monday” to persuade others to do the same. In one that would become an internet smash, he stands in his kitchen, smiling warmly at the camera and holding a cucumber.

After welcoming his online audience to the series, he begins his flow: Cucumba, Cucumba… Vitamins, minerals very high number, Silica – hair and nails get longer, Other vitamins make your bones dem stronger, Anti wrinkle – make you look younger, 95% water, Kidney cleanser, great hydrater, Detox, fibre, good regulator, Give your body good things don’t be a traitor. Get the cucumba, cut it inna slice, Put it inna jug of water overnight, You know what you get for a fraction of the price, Energy drink full of electrolytes. Raw inna salad is one of the use, Or as a base for your vegetable juice. Another surprise put a slice on your eyes, Take away the dryness – revitalize.

Oh yes, one thing I have left… Cucumba can also help with bad breath, Wash away the bacteria that cause the odour, Cucumba water instead of soda. Macka B Medical Monday. CUCUMBA! The video started to show up on influential websites and was shared by bloggers including Naomi Campbell, Diana Ross’ daughter and Beyoncé’s mum. It soon clocked up an astonishing 100 million views.

Other videos in the series rhapsodise Avocado, Tomato, Lime, Gooseberry, Dandelion, Scallion, Fennel and there is even a Cure for the Common Cold – very useful at this time of the year. Among those who were quick to recognise Macka B’s reach was The Vegan Society who made him a patron in 2012.

His Brixton show takes place at JAMM on Thursday 18 October and falls in the middle of a tour that kicks off at the Los Angeles Reggae Vegan festival.

He’ll be performing tracks from his latest album Health Is Wealth, which he describes as “nutritional, social, cultural and conscious”.

In a recent interview Macka B outlined the scope of his musical mission: “Music is such a powerful medium. You can use it to change the world. And that we really wanna do – to uplift the youth and to change the world for the better.” All power to him.