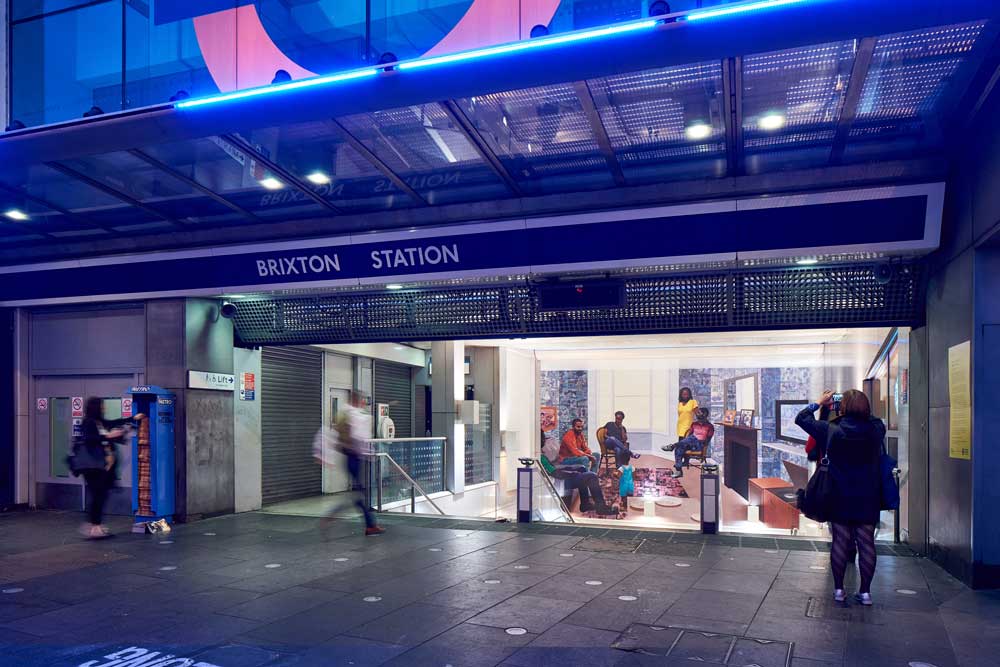 Art on the Underground unveiled its latest commission at Brixton tube station today (20 September). The work Remain, Thriving  by artist Njideka Akunyili Crosby is part of a new programme that takes its inspiration from murals created in the area during the 1980s.

This new commission forms part of Art on the Underground’s 2018 programme of exclusively female artists, a part of #BehindEveryGreatCity – a Mayor of London campaign.

Akunyili Crosby’s work explores her hybrid cultural identity, combining strong attachments to the country of her birth, Nigeria, and her home in Los Angeles. 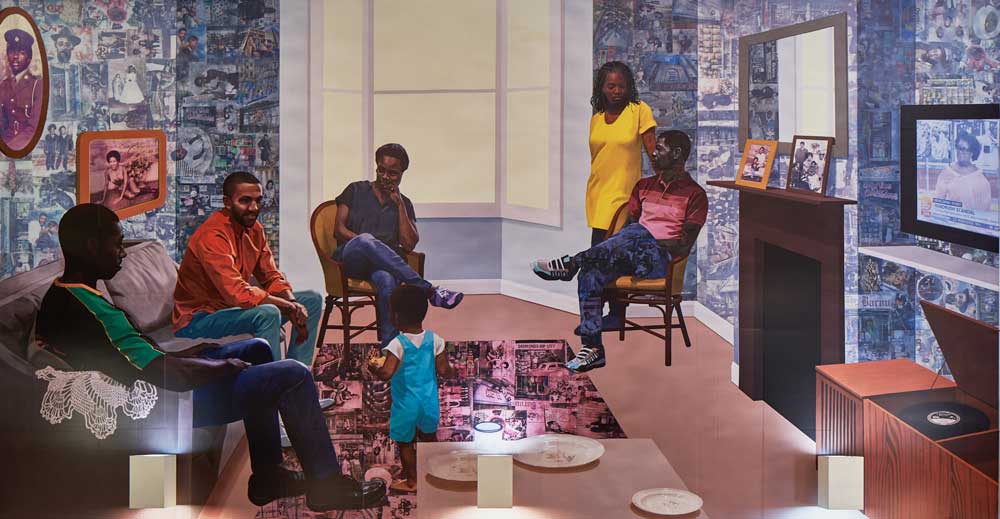 Remain, Thriving, made specifically for the entrance of Brixton underground station, depicts an imagined domestic scene – a theme predominant in much of the artist’s work – of an informal gathering of grandchildren and great grandchildren of the Windrush generation in a fictional home in Brixton. The space contains items – like a doily or record player – which the figures might have inherited from their parents or grandparents.

To prepare for the work, she spent time talking to members of the local community as well as public historian Kelly Foster, the Black Cultural Archives, and the Lambeth Archives.

The artist collated contemporary and archive images of Brixton to use in her final artwork. These background images echo the heavily patterned wallpaper of another age. Akunyili Crosby’s photo collage images of social gatherings also reflect history, community and politics, much like the original Brixton murals.

Brixton locations – the menswear shop The Baron and Brixton Rec are visible  – as are well-known people, including Jamaican-born poet Linton Kwesi Johnson and activist and community leader Olive Morris. Many of the locations in the transfers haven’t  survived, indicating as the Brixton Murals do, how the area has changed in a few decades.

Akunyili Crosby said: “For me, this work is for people who grew up in Brixton. I want the past to have a place in the present in this work: the work is very much about the present, but the past is so alive in it. 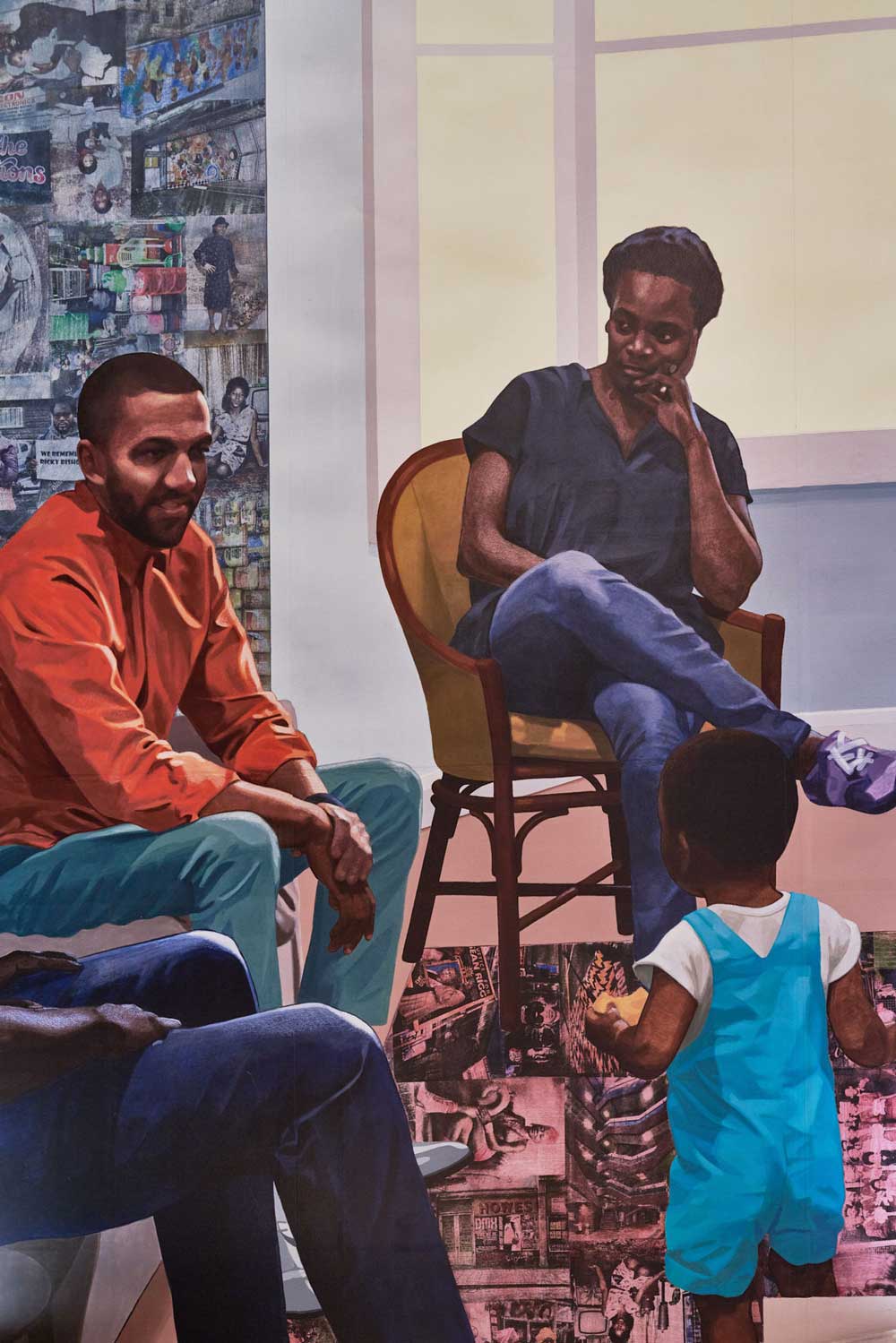 “I thought a lot about how you engage the space, how you engage people who might already know my work as well as people who have no idea as to why they’re looking at this living room scene as they enter Brixton station.

“I wanted the piece to be somewhat calming and quiet because it would be located in a bustling station, but I still wanted it to have all of the multi-century layers and stories of Brixton visible. I am honoured to create an artwork for such a public venue and for the opportunity to reach a more diverse audience than I might have before. I think it’s heartening that organisations like Art on the Underground are bringing artwork to public spaces in such a way.”

Eleanor Pinfield, Head of Art on the Underground said: “Through this new work, Akunyili Crosby has created a commission deeply rooted in Brixton. Akunyili Crosby’s intimate scene, imbued with local references and memories of the area, speaks to London today whilst making the past alive within it. The quiet energy and multilayered complexity of this work will engage millions of people in Brixton over the coming months. Akunyili Crosby’s work presents an extraordinarily powerful start to the series of commissions for Brixton that respond to muralism and the creation of collective memory.” 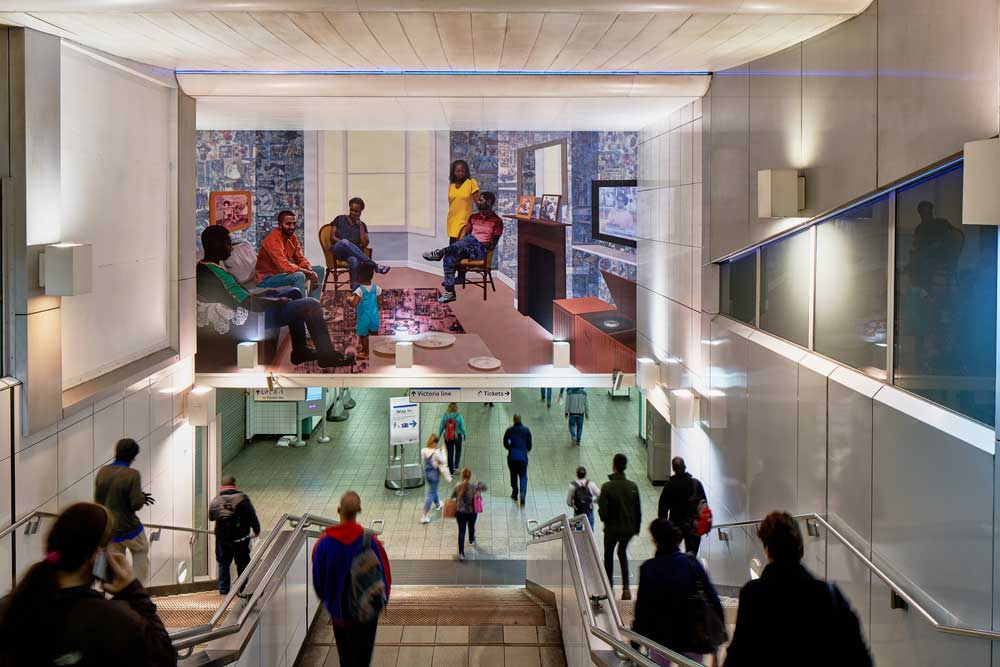 Deputy Mayor for Culture and the Creative Industries, Justine Simons said: “Art on the Underground has redefined public art, transforming the Tube into London’s largest gallery. As part of this brilliant programme, Brixton’s residents and its many visitors will be able to enjoy the work of multi-award-winning artist Njideka Akunyili Crosby.

“Women artists are woefully underrepresented in public artwork, so we are redoubling our efforts to celebrate and profile their talent as part of our #BehindEveryGreatCity campaign”

Alongside the launch of Akunyili Crosby’s work, Art on the Underground will produce a new map, extending its existing map series and highlighting the location of murals in the borough. The Brixton Mural Map will be available in September 2018 both online and in print from Brixton tube station and Brixton Library.

Six primary schools close to Brixton station and the Brixton murals worked over the summer term with Art on the Underground artist Meera Chauda.  The school children were asked to choose what they would commemorate or celebrate today about their locality and their own cultures, creating their own mural design. The work will be shown in Brixton Library in autumn 2018.

Are you an artist living in or around Brixton?

Award winning garden mosaic is up for auction. Bid now!

“The Dark” at the Ovalhouse