Students from Brixton’s School of Communications Arts created another striking and memorable campaign yesterday (3 July) when they distributed packs of “Brixton Road” cigarettes outside the Tube station.

Phil Le Brun and Adeline DeChaud were launching a range of cigarettes representing some of London’s most polluted roads.

On the same day, it was revealed that a South London girl may have died as a result of pollution from the South Circular Road in Lewisham.

Phil and Adeline said that air pollution on many of London’s busiest roads has become as bad for health as smoking. 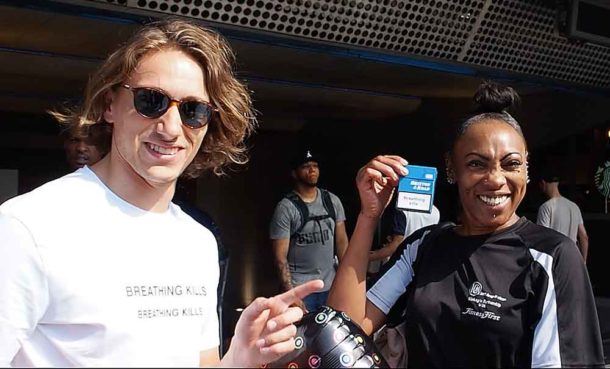 Shocked by the toxic effects of London’s air quality, they launched the range of cigarettes to urge Londoners to reconsider the health impact of their vehicle use.

They said that inefficient cars and trucks account for most of the city’s toxic air, with over half of London’s air pollution attributed to road transport. Londoners make 6 million car journeys each day, a third of these are less than two kilometres, or a 25-minute walk.

All have daily vehicle emissions so concentrated that anyone spending a day by the roads could be exposed to nitrogen oxides (NOx) equivalent to smoking more than 25 cigarettes.

“We chose to target these locations because of the deadly levels of air pollution, and because there are schools and nurseries nearby,” the students said.

“London’s air is having a severe impact on all of our health, but children are the most severely impacted.” 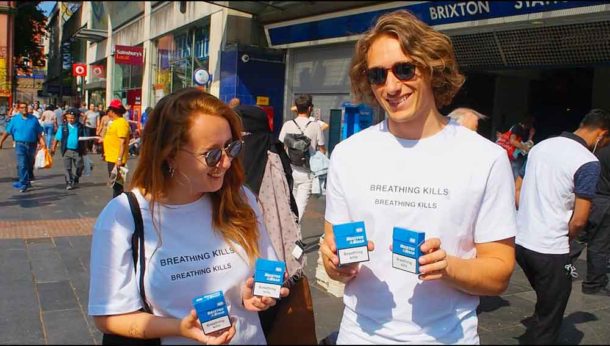 Marco Picardi, one of the organisers of London’s first Car Free Day on 22 September, said: “Car Free Day is an opportunity to test the transformative potential of car-free streets.

“New approaches are needed to address congestion, pollution and public health. Car Free Day is a catalyst to make healthy streets part of a daily routine for all Londoners.”

Chris Large of the charity Global Action Plan, said: “The true cost of air pollution in inner cities is staggering. Swapping one in four car journeys in urban areas across the UK for walking or cycling could save over £1.1 billion in health damage costs per year.”

Healthcare costs associated with illegal levels of air pollution are most acute in London.

Removing private cars from the roads and creating pedestrianised town centres would immediately improve air quality for all Londoners.

At this year’s London Marathon, NOx levels dropped by 89% where roads were closed to car traffic.

The team behind the cigarettes want their fellow Londoners to reconsider private car use and to encourage the mayor to use Car Free Day as a catalyst for accelerating the transition to pedestrianised town centres and a zero-emission transportation system.

The popular and successful School of Communications Arts is based in St Matthews Church.