Richard Galpin, local artist and project manager for the Kennington Chartist Project, on the culmination of the project on 7 July

An exciting local project will culminate on Saturday 7 July when the Kennington Chartist Project organises a day of workshops, participation and action for all ages in Kennington Park.

The day of activities is the culminating event for the project initiated and run by local people to commemorate the 170th anniversary of the great Chartist rally on Kennington Common.

In the spring of 1848, as revolution and unrest raged across Europe, Kennington was at the centre of the fight for social justice in Britain. Tens of thousands of people gathered on Kennington Common on 10 April, demanding the right to vote.

The Chartist movement was a popular campaign that saw working people come together behind the Charter’s six demands for democratic reform, at a time when only those with land and property were allowed to vote.

The story of the Chartists’ fight for justice includes dedicated women’s groups, and inspirational figures such as Anne Knight, who produced what is thought to be the earliest leaflet on women’s suffrage, and the radical William Cuffay, son of an emancipated slave.

Fast forward to 2018 – when Brexit, Trump, #Metoo and Black Lives Matter are in the news, amid fears of a breakdown in democratic values – and one of the aims of the Kennington Chartist Project is to ask – What is the legacy of #Kennington1848 today?

In the past few months the Kennington Chartist project (which has no particular political affiliations) has been working with local schools, youth groups and presenting a series or walks and talks.

We have been getting an incredible response from the work we’ve been doing.

This story really seems to engage people to think about their local park in a different way.

Kennington Park – like all public space in London – has been a contested space for a long time, but the rally in 1848 situates it within a wider national and international story.

In the 20th century Kennington Park has hosted other important rallies and protests, from Pride and Reclaim the Streets, to Poll Tax demos, and many union marches.

Now in 2018 we are trying to celebrate that history and open up a space for local people to engage in political expression in its many forms.

The emphasis on 7 July will be on workshops and participation.

Particular highlights look to be a set from spoken word phenomenon PoeticUnity that organises The Poets Corner at Brixton’s Black Cultural Archives every Wednesday, a debate with writer and activist Paul Mason and others, and the chance to print your own 1848 souvenir poster.

A youth workshop for ages 16-24 will focus on Black history and spoken word, while for children there is storytelling, music and a parade at 1pm.

The full schedule is at july7th.eventbrite.co.uk 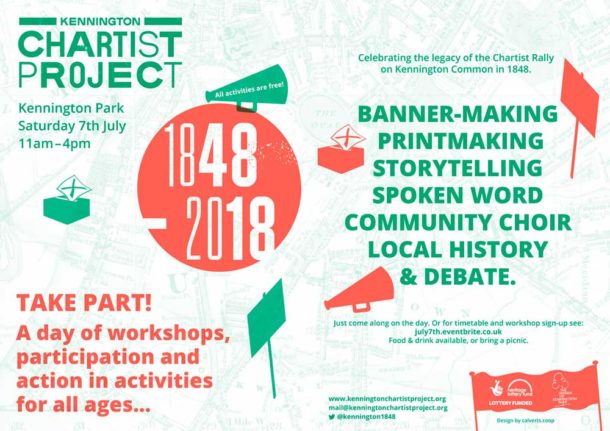