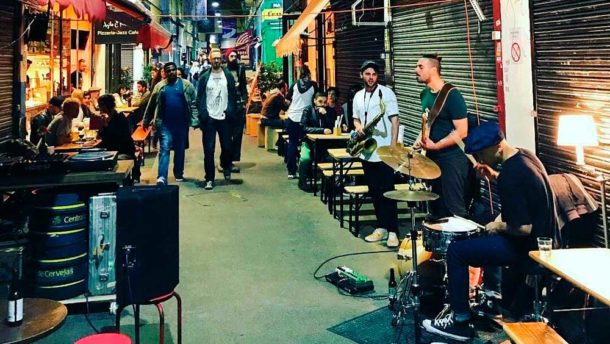 Abstract improvised music in a corridor of a market? Will it catch on? Yes it did.

Agile Experiments, who have been performing outside Brixton Village’s Agile Rabbit pizzeria for some time now, have sold out and now re-released a vinyl LP of original music from the project.

Since its launch on the group’s Bandcamp account, the music conceived in Brixton is now in the hands of experimental music lovers in New Zealand, Denmark, Sweden, Finland, Russia, the Netherlands, Canada, Belgium, France, Germany, Greece, Cyprus, Hong Kong, the USA and all over the UK.

Musician Dave De Rose says: “Our record Agile Experiments Vol.1, which was released in April, sold out of first press limited edition vinyl in the first week of pre-order.

“We have now re-pressed and the second press is doing well.

“The music is being distributed in a true grass roots manner – no Spotify, no iTunes, no Amazon or the likes – just our Bandcamp and record shops which include Brixton’s own Soul Proprietors.”

You can stream the music at bit.ly/Agile-1 Agile Experiments Vol.2 releases 10 September.

You can also watch most of Agile Experiments’ performances in Brixton Village on YouTube.

Members Ruth Goller, Josh Arcoleo and George Crowley explain on video that it’s about “getting together with good people, just making music for a few hours”. Around 14 musicians with impressive industry credentials have been involved in the project.