“I’m very glad to be here in the heart of Brixton, one of the centres for the Windrush generation,” shadow home secretary Diane Abbott told the hundreds of people gathered in Windrush Square yesterday (20 April) evening.

They were there in solidarity with the many children of the Windrush generation suffering from the “hostile environment” created for them by prime minister Theresa May when she was home secretary and continued by the current home secretary Amber Rudd.

Now May and Rudd were apologising, said Diane Abbott. But, she went on: “They should not be apologising. You know why? Because you only apologise when you make a mistake. They knew what they were doing. They knew the consequences of that so-called hostile environment.”

When Theresa May proposed the law making it possible to deport Commonwealth citizens, said Abbott,“ I got up in Parliament and told her what would happen”.

In 2014 when Theresa May changed the law, Labour, as a party, abstained on the legislation. But eight Labour MPs, including her and Jeremy Corbyn, voted against it.

“So don’t tell me you’re apologising when you knew what you were doing. You were warned by myself and others,” said Abbott.

“A whole generation turned into criminals and treated with complete contempt.”

Abbott said the figures for those in detention as a result of the policy could and should be produced.

People who had been deported should be invited to come back. Ans people who suffered in other ways should also be compensated

“They were humiliating people who helped to rebuild this country after the second world war,” said Abbott.

“We need to come together and demand justice. And I will not stop until we have justice.”

Weyman Bennett of Stand Up To Racism that organised the rally and who was MC for the event, was the first of several speakers to link the “hostile environment” with the problem of youth violence.

There had to be hope for young people, he said.

But some were excluded from school and ended up in gangs. They were not bad kids, but opportunities were being shut down.

Guardian journalist Gary Younge, whose reporting exposed the treatment of people who, through no fault of their own, could not establish a right to be in the UK, pointed out that 2018 is not only the 70th anniversary of the arrival of the Empire Windrush but also of the founding if the NHS.

“My mother came from Barbados to staff the NHS,” he said, “Black people built this place – with white people and Asian people and other people.

“But we are integral to this country. You can’t understand this country’s history, its wealth, its public services, its trains, its sports, its music, without us.”

But 2018 is also the 50th anniversary of Enoch Powell’s “rivers of blood” speech. The Windrush generation had not always been loved. “There is an element of this society that has always tried to deny, if not our existence, then our contribution,” said Younge.

He was concerned that this “new national treasure, the Windrush generation – who knew that we’d be up there with the Queen Mum? – will be separated as being ‘the worthy immigrants’.

“Which suggests that there are unworthy immigrants for whom this hostility is OK.”

This was effectively saying: “The hostility was not meant for you. It was meant for them”. 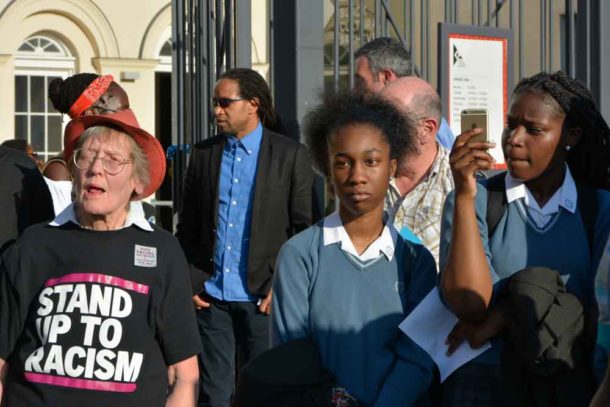 He said immigrants were being blamed for a crisis they had no responsibility for.

“It wasn’t Syrian refugees who traded in default swaps and crashed the economy. It wasn’t asylum seekers who were bailed out to the tune of billions of public money. We know at whose door this crisis sits.

“This country operates on the golden rule – that those people who have the gold make the rules.

“The Windrush generation did not violate any laws. The law violated them.”

One of many other speakers was Trevor.

He has lived in London since 1958. His oldest child is 51. “And I’m still trying to get a passport,” he told the crowd. “They put me in a detention centre, saying I was ‘illegal’. “They let me come out with a bit of paper from the Home Office saying I am a British citizen.

“But every time I try to do something with it, they say it isn’t valid.

“And I still can’t get a passport.

“My mother worked in two hospitals. Lambeth hospital, which is no longer there, and Guy’s hospital.

“And I still can’t get a passport.

“I didn’t decide to come here. You sent for my parents.”

Trevor paid tribute to another speaker, Michael Groce, whose mother Cherry was shot in her own home in Brixton by police in 1985. She lived for the next 26 years confined to a wheelchair until April 2011 when she died as a result of the shooting.

Groce works at the Green Man centre in Loughborough Junction and has been providing help and advice for local people affected by the “hostile environment” for some time. 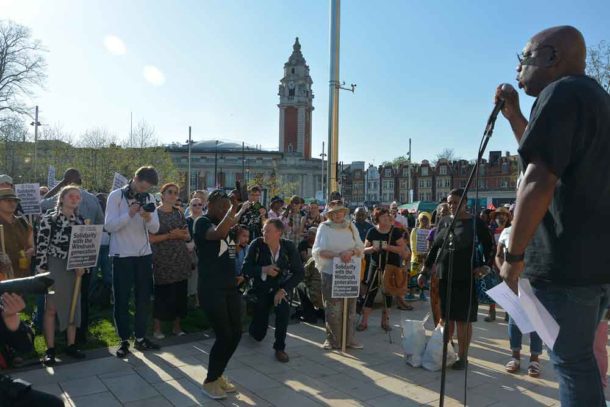 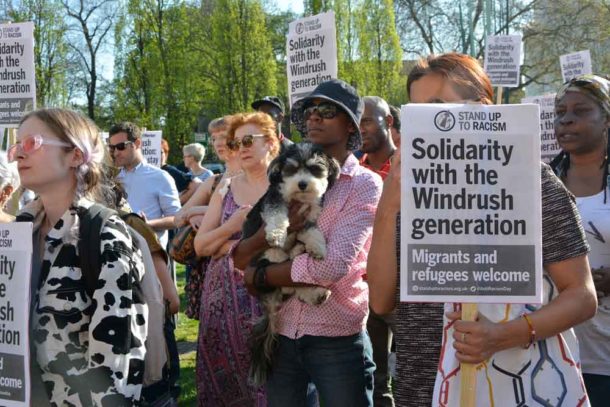 From Brixton to Calais to help refugees