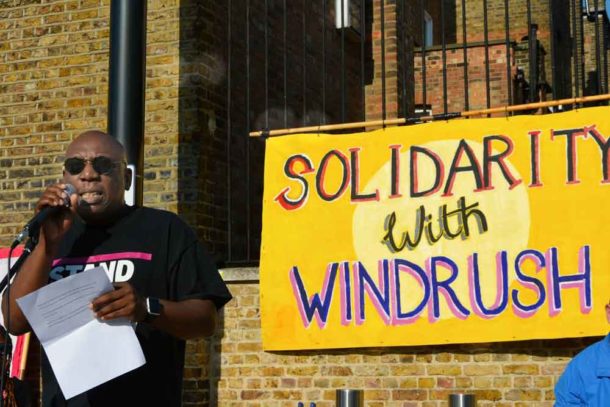 We are very fortunate in Brixton to have the Black Cultural Archives on Windrush Square, where there will be a public meeting on Saturday 28 April from 2 to 5pm, so that residents can learn more about this issue. It will be followed by a free legal clinic organised by local solicitors. Please do go along if you would like assistance.

What has been termed the “Windrush Scandal” cannot have escaped most people’s attention over the past couple of weeks.

The “Windrush Generation” came to the UK from 1948–1971, at the invitation of the British government, to take up work opportunities. They arrived in the UK from the Commonwealth on British passports and were eventually granted “indefinite leave to remain” (“settled” status) in 1973.

But no official paperwork was issued to confirm this new status. Then, in 1981, the British Nationality Act gave settled residents a five-year window in which to register as British Citizens, but many failed to do so, believing they already were. Now, years later, thousands find themselves in a frightening legal limbo.

The current crisis is principally due to the Immigration Act 2014, which quietly removed the legal protections which previously existed for those with “settled” status.

This has resulted in people who have lived here for decades, suddenly being asked to prove that they have the right to remain living and working in the UK. That’s a major hurdle for some, as the government destroyed immigration landing cards in 2010. And producing acceptable evidence of residence for every single year, as required by the Home Office, has also been an uphill struggle.

Consequently, many have been deported, prevented from returning, or are living under threat of deportation.

Here in Brixton, we’re a diverse community and many of our African-Caribbean residents have been adversely affected. The news media has depicted harrowing stories which detail their heart-breaking experiences.

Two Lambeth residents that I am aware of, have not been able to return to the UK after visiting family overseas several years ago.

Thankfully, due to the huge public outcry, the government has promised to take steps to rectify the situation and to compensate victims for the financial and emotional distress caused.

Lawyers, who alerted the government to the dangers hidden within the Immigration Act even before it became law, are now preparing to assist with the inevitable flood of enquiries.

Having spoken to professional colleagues, my advice, to anyone who thinks they may be affected is to check your paperwork to ensure that your immigration status has been regularised and, if in doubt, seek legal advice from a qualified immigration solicitor as soon as possible.

Certainly, you should think twice about taking an overseas holiday on a foreign Commonwealth passport if you’re unsure about your UK immigration status.

BLACK HISTORY MONTH: Win this illustration of ‘the Brixton Nine’