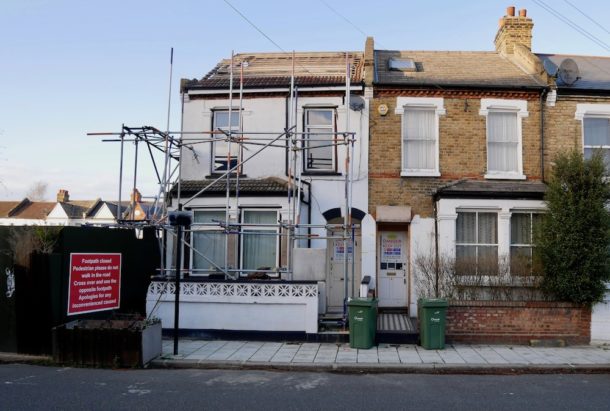 The ongoing saga of the redevelopment of the old Tuborg Warehouse site on Mandrell Road continues to cause problems for local residents.

The warehouse wall on Mauleverer Road featured a 1983 mural by Jane Gifford that featured in the video for SL2’s 1992 rave anthem “On A Ragga Tip”. A campaign to save it was launched when plans for demolition emerged. However, after Lambeth initially refused planning permission to Capella Developments for 8 houses in 2013, approval was given on appeal a year later.

So far the build has been beset by problems. Demolition of the old warehouses in 2015 exposed the end wall of the 1980’s housing on Mauleverer Road. When the contractors failed to seal the wall residents resorted to stuffing plastic bags into holes where rain was flooding in. Eventually the wall was rendered but the residents are still waiting for internal repairs.

In 2016 the site was sold to a second developer, Banda Property, and by now the project had grown to 16 four storey houses. Banda made a concerted effort to get the community on side with planters built into the site hoardings but once excavation of the site began things started to go wrong again. As the contractors dug down they failed to support the existing houses on Mandrell Road. The first house quickly became uninhabitable with the end wall and roof removed for safety. 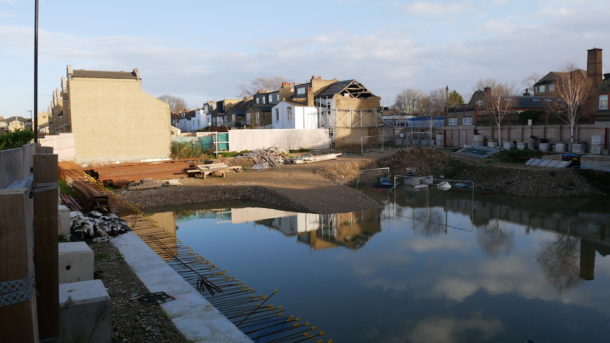 For most of 2017 the site sat empty, with a huge pool forming in the clay soil. While the owners of 2 Mandrell Road battled with the developers, cracks started to emerge in number 4 until that too had to be evacuated. The original contractors went into liquidation in October 2017, owing more than £4m.

New contractors restarted work in March and demolished the first of the houses on Mandrell Road.

Asked for comment Banda property said “Damage was caused to 2 and 4 Mandrell Road during excavation performed by Titan Construction Management Ltd (now in liquidation). Settlement was achieved promptly and in good faith with the adjoining owners”