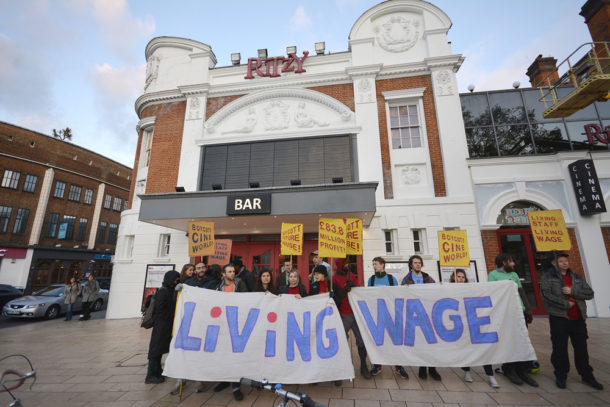 Labour leader Jeremy Corbyn has pledged solidarity with members of the BECTU union on strike at Picturehouse cinemas, including Brixton’s Ritzy, today (8 March).

“I fully support your campaign to be paid the real living wage and to tackle the injustices that you face in your workplace. We desperately need an economy that works for the many, not the few,” he said in a statement.

“For too many people, work is insecure and low-paid. On International Women’s Day, it is right that we recognise that women are disproportionately affected by poverty pay and strengthen our resolve to tackle it.”

Workers at the Ritzy and four other Picturehouse cinemas in London have been campaigning – in the longest-running dispute in UK cinema history – for the living wage and for other rights, including maternity leave. They are also demanding that four sacked Ritzy union reps be reinstated,

“The next Labour government will give all workers equal rights from day one of their employment, whether part-time, full-time, temporary or permanent so that all workers will be protected by decent sick pay, maternity and paternity pay,” said Corbyn.

“All workers should have the security of a union in their workplace, so Labour will make it easier for unions to gain access to workplaces and to gain recognition.”

Union reps “should not be dismissed for standing up for their members’ rights,” he said, calling on Picturehouse to reinstate the four sacked BECTU reps with immediate effect and “to sit down with the union to discuss ways to resolve this longstanding dispute”.