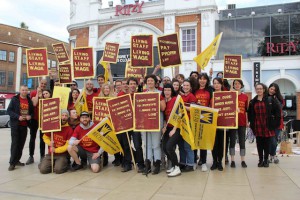 A union ballot has gone out to Ritzy staff campaigning for the London Living Wage to vote on a new pay deal at the cinema.

BECTU, the media and entertainment industry union, has recommended that staff at the Ritzy cinema accept the new deal brokered with the Picturehouse on July 31.

The offer fell short of immediately paying the London Living Wage of £8.80 per hour but the company has promised to do so to all staff on main grades by September 2015. In addition, staff are being offered an immediate pay increase from £7.35 to £8 per hour, back-dated to october 2013.Supervisors will retain their differential of 50p per hour.

To take account of the likely increase in the London Living Wage, probably in November of this year, negotiators built in a further set of pay talks in June 2016 aimed at a two-year settlement with a guaranteed minimum rise to £9.10 an hour.

The ballot will close on August 26.