Lambeth council has responded to calls for a ballot of residents of Cressingham Gardens on plans to demolish and rebuild the estate by saying that Labour party policy on such ballots would apply to future decisions under a Labour government.

Deputy leader, investment and partnerships, Paul McGlone said: “Labour party policy on ballots would apply to future estate decisions under a Labour government, when councils would have access to the new powers, flexibility and funding to provide decent homes that are currently denied to them by this government.”

He said the council has worked closely with residents over the past few years on its plans to rebuild Cressingham Gardens, which overlooks Brockwell Park at the top of Tulse Hill.

The rebuild, he said, would “provide those people currently living in poor quality and overcrowded homes with brand new homes to meet their needs, as well as delivering new council homes for families on the housing waiting list.”

The council says the demolition and rebuilding of the estate, which currently has just over 300 homes, will result in 158 extra ones, including 27 family sized homes at council rent levels. Some of the new building would be for private rent or sale to help pay the estimated £80 million cost of the redevelopment.

Opponents say that the plan would result in a maximum of 23 extra homes at social rent.

Demolition is due to begin in two years’ time. Getting planning permission is expected to take a year.

Plans drawn up by residents for redevelopment intended to preserve existing homes and add new ones were rejected by the council. 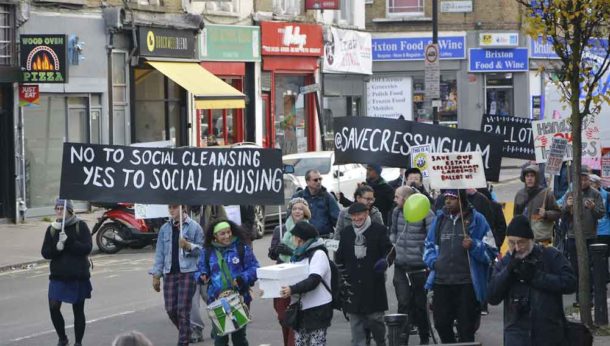 A protest by Cressingham residents and supporters in Brixton on Saturday heard repeated demands that the Labour-controlled Lambeth council should follow developments in party policy calling for ballots of residents in estates facing regeneration.

The specialist social housing publication Inside Housing reported that Labour party sources had told it that the ballot policy was  only intended to be applied if and when the party came to power. It added that the vote would not  automatically become Labour policy because the party’s national policy forum has the final say.

Lambeth’s plans for the Cressingham estate differ from those of other controversial redevelopments in Southwark and Haringey, north London, in that the “development vehicle” to be used to fund the work is intended, initially, to be wholly owned by the council.

The council says that its “Homes for Lambeth” organisation will “undertake commercial development for the benefit of local people – so that we retain and reinvest surpluses into building homes and delivering the services that local people need and desire”.

But the policy does not rule out future “shared equity” schemes. It says there will be the potential for Homes for Lambeth to create subsidiary companies: “These could be joint ventures in which the equity could be shared with a third party. The council would consider doing this so, for example, we can use right to buy receipts to build more and better homes”.

The council is using the giant property company Savills to help it set up its own housing association which, it says, will rent properties built by Homes for Lambeth at about a third of market rent.

At the same time, acting as a commercial property developer through Homes for Lambeth, the council believes it can “use the 15-20% development surplus that private developers normally make” to build more homes for local people.

It has agreed a £6.5 million contract to manage the Cressingham Gardens project with multinational consultancy Mott MacDonald.

The council says the contract represents less than 8% of the total cost of redeveloping Cressingham Gardens – putting it at more than £80 million.

Mott MacDonald was appointed formally last month and its staff have invited Cressingham residents to meet its representatives. Lambeth council has also appointed an “independent adviser” for residents.

The council’s “design team” says it met residents last week to start to learn “more about what residents want and how they want to get involved”.

Its intended timetable would see residents “sharing their views” with the team until autumn 2018, followed by a year to gain planning permission for the proposed redevelopment.

Demolition of existing homes is planned to begin in December 2019 with work on new buildings due to start in early 2020. The earliest time that new homes would be completed is 2021.