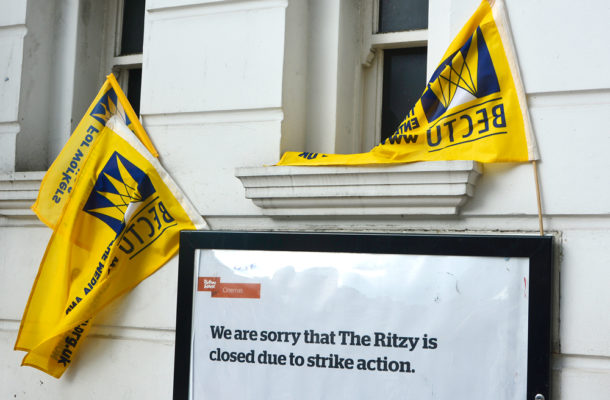 Workers at Brixton’s Ritzy cinema will demonstrate on Windrush Square today (5 November) and tomorrow join the biggest strike in the history of British cinema with a walk-out timed to coincide with Living Wage Week on Monday (6 November).

The Living Wage is set to be raised to more than £10 in London in line with inflation.

Workers and supporters will protest outside the Ritzy Cinema from 3pm today.

They will then join strikes across five cinemas in the Picturehouse chain in London on Monday.

The actions are the latest round in a campaign for workers in the chain to be paid the living wage as well as sick pay, maternity pay and for union recognition.

The long-running dispute began at the Ritzy and has seen the sacking of union representatives there belonging to BECTU, the cinema workers’ union.

Picturehouse, which has stubbornly refused to talk to its staff, but employed expensive lawyers to threaten them, is part of the hugely profitable Cineworld international cinema corporation.

There will also be protests outside Cineworld cinemas in Nottingham, Cambridge, Birmingham and Oxford.

Kelly Rogers, one of the sacked Ritzy union reps, said: “As the Living Wage rises with inflation, we are sinking further below the poverty line.

“Cineworld makes annual profits of more than £90m – but its minions in Picturehouse management don’t just refuse to pay us a decent wage, they refuse to negotiate with us or even recognise a union.

“We will strike until we win – and the campaign is getting bigger and spreading to more and more cinemas.”

BECTU members at the Ritzy voted 92% in favour of industrial action in their most recent ballot.

Company sick pay for all

Reinstatement of four sacked union reps at the Ritzy.

The four and their union BECTU are taking Picturehouse to the Employment Tribunal, charging that the sackings were unlawful because they amounted to victimisation for trade union activities.

The current phase of the campaign began in the summer of 2014 when Ritzy workers went on strike 13 times for the London Living Wage, and secured a 26% pay rise, But they are still paid at a rate – £9.10 an hour – below the London Living Wage. Workers at Picturehouse’s other London sites are paid £9.05 an hour and workers outside London are paid £8.18.

Local MP Helen Hayes has backed the campaign in parliament with an Early Day Motion – signed so far by 38 MPs – and raised the dispute at Prime Minister’s Questions.