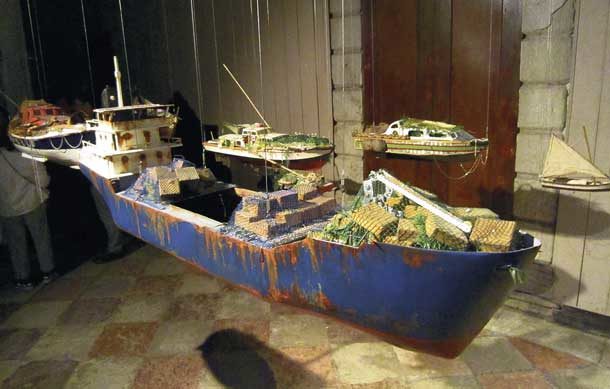 From a squat in Stockwell to exhibiting at one of the art world’s top shows – the Venice Biennale – is quite a journey. Local artist Hew Locke embarked on it when he moved to Brixton in 1989 and is now a renowned artist exhibiting internationally.

He has created a new work for the biennale which runs until 26 November. It is the third time he has exhibited there.

Locke’s work On the Tethys Sea is on show in the Diaspora Pavilion and focuses on ships as symbolic objects. According to the biennale blurb, the ship can be seen as: “a vessel of the soul, a means of escape, of both safety and danger”.

Locke finds his inspiration in things around him. “I moved to Brixton in 1989, working in a squatted hospital which housed the Stockwell Independent Artists Group. 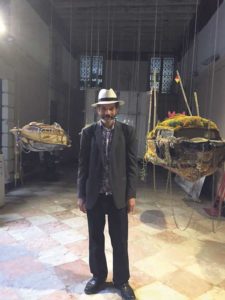 “The market is and was a source of inspiration, the street fashions, the groceries for sale, the hair and beauty products. I used to buy lots of materials here to make my art – such as plastic toys and flowers, hair extensions and fabric and used to gather lots of old cardboard boxes to make it too!

“I am fascinated by the fishmongers and the vegetable stalls, and the hair and beauty shops. The Kashmiri yam boys selling West Indian cassava and sweet potato, Colombian butchers selling deep fried pork to people from the Seychelles and Mexico, Vietnamese nail technicians beautifying their Black British clientele. This is how I envision multi-cultural Britain. This is what it looks like.

“I walk around Brixton and ideas flow through me and around me. I come to the studio and then I start to function on that sort of high from being in the market. I’ve been living in Brixton for about 16 years and I’m not bored yet, which is quite a feat.”

The Diaspora Pavilion at the Venice Biennale challenges the prevalence of national pavilions at an international exhibition and is spread across different locations in Venice.

Nineteen artists explore what “diaspora” means. Locke was a mentor to Abbas Zahedi, one of the emerging artists in the show, and has worked with him over the past few months. Mentors and established artists all exhibited together.

Locke has another show coming up in Germany that explores the city of Bremen’s links with slavery through his work Cui Bono.

He has just finished making a single large boat three metres long for the show.

“It is hanging in the upper hall in the medieval town hall there,” he says. “Four beautiful old model galleons have been hanging there since the 16th century. They took one of them down for me – the first time in many years – and are hanging mine instead for the course of the exhibition, which is called Blind Spot.

Locke says “Cui bono” is a Latin phrase describing the question asked in a legal or police investigation when trying to discover who has a motive for a crime.

“The motive may be hidden and the guilty person may be not who it first appears to be. The criminal may be the person who gains financially.

“Even though Bremen merchants may not have traded slaves directly, the city’s prosperity was dependent on cotton and tobacco – the products of slave labour in the USA and Brazil.”