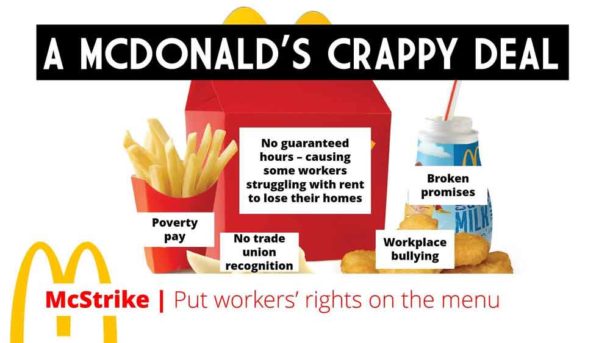 Local trade unionists and supporters are planning to demonstrate outside Brixton McDonald’s this evening (4 September) to back strikers at McDonald’s branches in Cambridge and Crayford, South East London.

Today is the first time British McDonald’s workers have gone on strike. They are demanding increased pay of £10 an hour, an end to zero-hours contracts and union recognition.

McDonald’s branch in Brixton is a minute’s stroll from the Ritzy Cinema, where workers engaged in a long dispute over similar issues recently voted to continue their campaign of strikes.

The McDonald’s workers’ union, the Bakers, Food and Allied Workers Union, is calling for solidarity action. In Brixton, it is due to happen between 5 and 7pm.

A McDonald’s UK spokesperson said the dispute was related to its internal grievance procedures and did not concern pay or contracts.

They said that the company and its franchisees (Brixton McDonald’s is run as a franchise) would give hourly paid employees “the option” of a guaranteed-hour contract by the end of this year and that their pay had increased by 15% since April last year.

More information about the campaign