Lambeth council’s planning committee last night agreed to defer consideration of plans to build a six-storey hotel in the centre of Brixton as residents near the planned development questioned claims about consultation on the project.

Chair Cllr Clair Wilcox told the committee that council officers had asked the committee to “have another look” at the application that was first discussed with the council in March 2015.

Rob O’Sullivan, head of development management in the council’s planning department, said that the council was “in receipt of late information” from Transport for London (TfL) – the body responsible for transport systems in greater London.

TfL was “raising some concerns” with the application, he said. Officers were asking that consideration of the application – which they are recommending be accepted – be deferred so that discussions could take place.

Officers did not think that there was enough information to present to members to allow them to make an informed decision on the application.

Cllr Wilcox thanked officers for recognising additional information was required, preventing the “very painful process” of considering an application and not being able to complete it – which “wastes everybody’s time”.

Brixtonblog’s previous story on the project drew attention to plans to allow coaches delivering guests to the hotel to park at bus stops on Briton Road.

Local residents are becoming increasingly concerned about the planned development and reject claims made by the developers that there has been “an extensive period of pre-application discussions with officers and the community”.

An initial “consultation” exhibition on plans that have since been extensively revised lasted two and a half hours on a Saturday afternoon and was visited by 15 people.

Local residents question claims by the council that there was a later “consultation” of 14 days in May this year organised via letters to residents and interested organisations. They have already collected the names of 20 people living very close to the planned hotel who say they did not receive a letter about it. 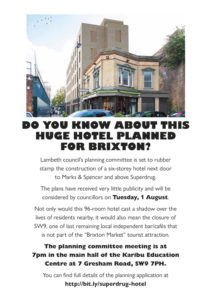 Alan Culverhouse, owner of the SW9 bar that will be closed by the development and bar staff have begun to distribute their own flyers (right) to warn residents about the plans.

Despite the fact that planning permission has not been granted, work has already begun on a TfL cycle hire docking station outside the SW9.

The planning application says that it has been requested by “both TfL and Lambeth’s transport officers” and will be funded by an £80,000 contribution from the developers.