“Fair Funding for all Schools Lambeth” is a campaign set up by a group of parents representing 15 Lambeth primary and secondary schools. In just a few weeks it has gained the support of hundreds of parents across the borough. 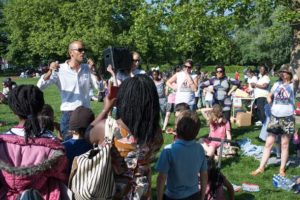 The picnic (Friday 26 May) was part of a national day of action to raise awareness of planned school funding cuts. As well as speeches, local school choirs performed and there was a poster competition where children highlighted what they love about their school.

The events were held by the parent-led campaign to bring school funding cuts to the attention of all parties and candidates campaigning for election in constituencies across the country. The campaign is calling on them to commit to addressing the massive funding gap facing schools across England. 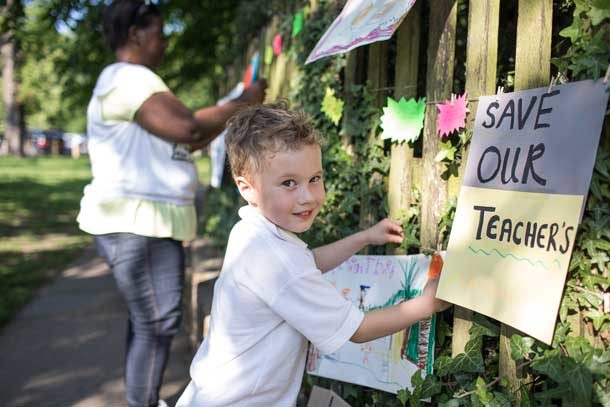 “As a result of the brilliant campaigning by parents across the country, all parties now accept the need for more school funding. We’ve seen major concessions in the party manifestos but, sadly, not all of them go far enough. At the very least, we need pupil funding to be protected in real terms over the next five years. Anything that falls short of that is unacceptable. So parents will be using events like ours to keep the pressure up and make our voices heard. We’re really pleased that so many people have turned up to show their support today.”

At a packed public meeting prior to the picnic, Ellie Brown from Fair Funding For All Schools Lambeth said: “As parents in Lambeth we don’t want to see our schools without the funds they need to carry on providing a good education for our children. We don’t want schools to have to cut their brilliant teaching staff, to stop offering certain subjects, or to make class sizes larger. We want an education budget which is protected in real terms.”

According to the campaign schools across the country face a funding gap of £3bn over the next four years due to budgets remaining static in the face of a growing student population and rising costs.

The National Audit Office says this adds up to the biggest cut in school spending power since the 1990s.

Readers can find out more by following the group on Twitter @FairFundLambeth or joining them on Facebook.

Other ways in which parents can take action include: finding out if their school has a rep and working with them on the campaign, volunteering to be a rep in their school or simply signing the campaign petition