Local resident John Eacott has played on Top of the Pops and at the Proms. Now he wants to start a sailing club – in Brixton! Delores William caught up with him over a cuppa in San Marino. You can listen to the audio below.

John Eacott lives in Brixton and teaches music at Lewisham Southwark College in Brockley. He’s also a qualified sailing instructor, and feels passionately that sailing should be for everyone and wants to start a club here in Brixton.

Also a talented musician, John was part of the eighties band Roman Holiday who had a hit with Don’t Try To Stop It in 1983. Top of the Pops recently Tweeted him as the band were on one of the regular repeats of 80s TOTP broadcasts. He freelances as a musician and often plays at venues in Brixton.

As part of the jazz group, Loose Tubes, he was one of the first jazz musicians to play at the Proms. The Evening Standard hated them, believing them to be too radical and not at all what the Proms – famous for classical music and the raving Little-Englandism of its “last night” and Rule Britannia – should look like, which John loved.

He grew up on Hayling Island, Portsmouth, where he developed his love for sailing. After school, he would go sailing or rowing. He describes sailing as a spiritual experience that is good for the soul. 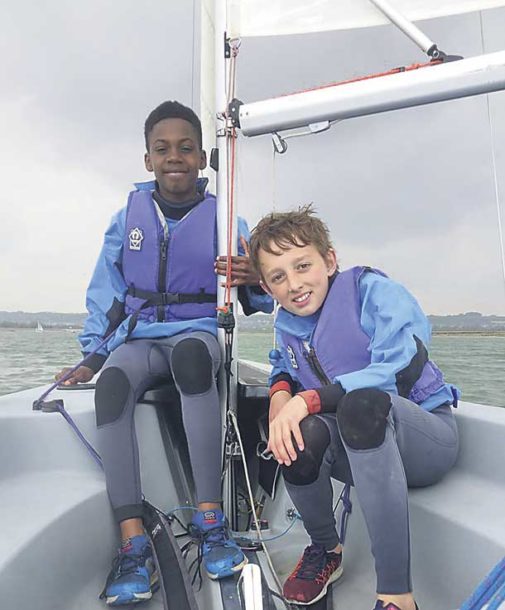 But, he says, there’s a visible lack of diversity in the sport. At Cowes week, on the Isle of Wight – sailing’s big annual get-together – there’s a huge crowd, “but it’s very monochrome with hardly any diversity”. The irony of the location, just across the Solent from his childhood home, is not lost on him.

John’s no fair weather sailor and raised the issue of cultural diversity at a Royal Yachting Club instructors conference where he received a sympathetic hearing.

Two sailing clubs in London support racial diversity and access for disabled users – the Ahoy Centre, based in Deptford, and Greig City Academy school in Hornsey. They both also teach boat building.

Greig City Academy are taking part in the Fastnet race this August in a 45-foot yacht. Established in 1925, this notoriously stormy and difficult event is also one of the most prestigious races in the sailing calendar. Good luck to them.

There were no black or ethnic competitors in the UK’s Olympics sailing team, and this is something John would like to change in the next 10 years.

John is in the process of getting a Brixton Sailing Club up and, well, sailing. if you would like to get involved contact him at Eacott20@gmail.com.