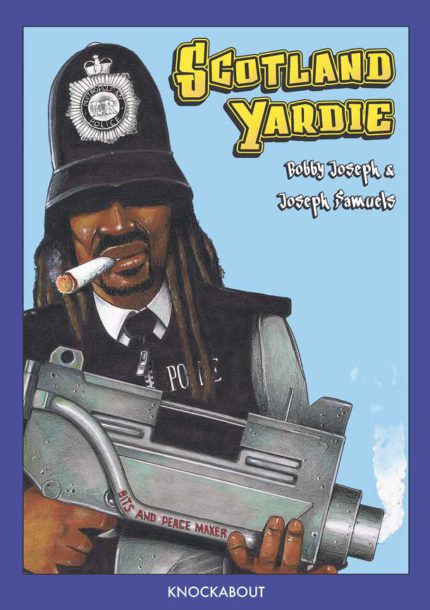 David Cameron being eaten alive by pigs on the streets of Brixton is just a sideshow in the graphic novel Scotland Yardie which is set on our home turf.

Politically correct readers should stop reading now. But if you like laugh-out-loud jokes about things that should make you weep and rage, then Scotland Yardie is the book for you.

The eponymous hero is brought from Jamaica to Brixton by mayor Boris Johnson to be a role model for Black police officers. He finds corruption and worse at every turn and his unorthodox ideas about how to fight crime cause consternation.

Brixton is populated by a cast of film and TV stars and patois-speaking cats and pigeons. No stereotype is too gross or insulting to escape brain-stopping satire.

Brexit and gentrification feature in a story that samples every cop film or TV show you have seen and probably some you haven’t. “Black Lethal Weapon in Sarth London” is one description.

Scotland Yardie was the break-out character from the controversial cult comic classic Skank Magazine in the nineties. Twenty years on, the character is back in his first graphic novel, brilliantly scripted by Bobby Joseph (creator of Skank and Black Eye comic) and illustrated with genius by Joseph Samuels (vice.com).

And it’s as clever as … choose your own expletive, because you’ll find it in the book.

It’s £10.99 well spent and it’s published by Knockabout Comics – Britain’s biggest independent comic book publisher.You can get it on Amazon for a bit less than that. You can even get a signed copy at Foyles.