The sun and the moon shared duties shining down on Champion Hill on Tuesday night, where a crowd of 843 saw Dulwich Hamlet come from behind to beat Enfield Town 2-1 in their first home game of the Ryman Isthmian Premier League season.

Having had the best of the opening exchanges, Dulwich should have taken the lead when new signing Gavin Tomlin drilled a ball across the face of goal where another new addition, striker Danny Carr, saw his shot from six-yards draw a fine point-blank save from Enfield goalkeeper Nathan McDonald.

With manager Gavin Rose setting his side out in a 4-2-3-1 formation, much of Dulwich’s best work was coming down the right – Nyren Clunis looking particularly lively and full-back Sanchez Ming foraging forward to overlap.

However, it was Enfield who took the lead in the 26th minute.

Following some grappling in the box between Matt Drage and Enfield’s Tyler Campbell, referee Simon Finnigan deemed the Dulwich centre-back the culprit and pointed to the spot, where Billy Crook stepped up to send ’keeper Preston Edwards the wrong way.

Despite having controlled the match it looked like Dulwich would to go into the break behind, before full-back Nathan Green delivered a teasing cross from the left which was met by the effervescent Clunis who climbed above the Enfield defenders to nod the ball home.

The second half continued in much the same way as the first, and four minutes after the break Dulwich almost took the lead when Ashley Carew laid the ball off to Carr whose arced shot rattled the crossbar.

Minutes later Ibrahim Kargbo’s effort was scrambled off the line during a goalmouth melee. Despite the howls of appeal from the fans behind the goal, referee Finnigan deemed the ball not to have crossed the line, and with goalmouth technology unlikely to trickle down to the Isthmian Premier anytime soon his judgement remained sacrosanct.

Dulwich’s reward finally came in the 68th minute when a corner delivered deep by Carew was headed back across goal by Michael Chambers, where Carr, having conspired to miss from six-yards in the first half, this time prodded home.

Dulwich could have had a justified and nerve-settling two-goal cushion had it not been for a brilliant save from McDonald in the Enfield goal, tipping over a close-range header from Drage.

Speaking after the match, Dulwich manager Rose was careful not to get carried away with a solid start that has seen his side win one and draw one of their first two league games:

“It’s early doors so you can’t tell too much at this stage, but Enfield are a good team and we had to earn it. Credit to the boys, they showed great fighting spirit to come from a goal down to win the game.

“It takes a good 10 competitive games for people to get up to match fitness. We’ve got a few new signings and there were stages out there where we looked like we were starting to gel. It’s just a case of giving them the opportunity to show what they can do.”

Next up for Dulwich is Leiston at home on Saturday. 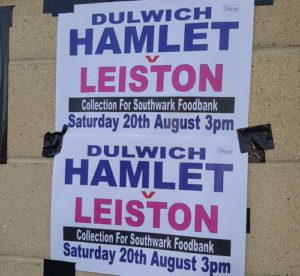 Ahead of match the club is asking fans to bring donations for the Southwark Foodbank. This follows last year’s successful initiative where almost 400kg of goods were collected. All donations of non-perishable goods and foodstuffs are welcome with the foodbank running low on supplies during the school holidays.