We have a very serious problem with extreme youth violence. It is getting worse and we have failed to get to grips with it 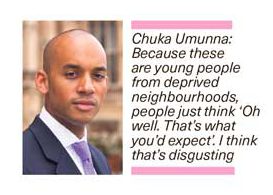 It is ten years since Chuka Umunna, then a young lawyer, became a trustee of a Brixton youth charity, the 409 Project.

“What shocked me was the level of detail that some young people in Lambeth were able to give me about a gun – they could tell me how many bullets a MAC-10 could spray in a second or in a minute,” he recalls.

Even more shocking was the ever-growing list of young people in and around Brixton who died, and continue to die, from knife and gun crime.

In 2008 29 young people in London alone lost their lives as a result of knife crime. This statistic fell from that point until 2012, when it began to rise again.

According to Citizens Report, a not-for-profit organisation that collects data on the issue, 17 London teenagers lost their lives to this violence in 2015 – up from 11 in 2014.

The number of offences the Metropolitan police tags as “gang violence” has gone up by more than 25 per cent since 2012.

Many incidents go unreported and are known, if at all, by a victim visiting A&E, not in an ambulance but in a private car, and remaining silent about what caused their injuries.

Chuka Umanna is explicit: “We have a very serious problem with extreme youth violence,” he says. It is “quite different” from the problems he knew about when growing up in the area. “It is currently getting worse and, frankly, we have failed to get to grips with the problem.

“We see a huge amount of tragedy, wasted lives and some young people living in a parallel universe from everybody else.”

The MP was prompted to approach the Bugle in his continuous campaign to keep the issue in the public eye by the latest figures: “In Lambeth in the last four weeks there have been 11 stabbing incidents. The overwhelming majority of those have been multiple stabbing incidents – one person being stabbed more than once.

“Since the beginning of the year, we have had 114 incidents of serious youth violence in Lambeth – that’s someone being stabbed and potentially losing their life.

“Across London there have been over 2,300 such incidents since the beginning of the year. This is in line with what was happening last year. There has been no improvement at all.”

Chuka Umunna is concerned that public attitudes to and reporting of such incidents – when they are reported – is being affected by a simple four-letter word: Gang. “It has become a serious problem for two reasons.

“First, it enables agencies and government to put this problem in a pigeonhole.” That enables them to think when an incident occurs: “Oh well, that’s how it is with those young people”.

Second, “It reinforces gang culture. It encourages young people who are not gangsters to come to view themselves in that way and play up to a certain stereotype.

“We need to stop using that term.

“The difference between now and the last peak of youth violence locally in 2008-9 is that the groupings tend to be smaller and much more fluid.”

While the issue is one for criminal justice and enforcement, it is also a mental health issue, says Chuka Umunna.

“A lot of young people are pretty traumatised and are under-developed because of their age and are not being given any support for what they are going through. In Lambeth we have one of the highest rates of domestic violence in the country. We have some of the highest rates of substance misuse. All of these things impact on the home environment of the young people we are talking about.”

Then there is the fact that “there are just not enough things for our young people to do outside of school and, therefore, no channel for their energy”.

In cuts to local government funding by central government since 2010, youth provision has often been the first to suffer, because many of those services are not statutory, says Chuka Umunna.

Yet, he says, some young people will spend more time with a youth worker than with their teachers. But “we don’t put youth work on the same level and give it the same standing as teaching – and we should”. Youth work needed to be recognised as a proper profession and paid as such. But members of tenants and residents association were being expected to “do it on the side”.

Another key component of the problem was change in the labour market. The stereotype of a single parent struggling to bring up teenagers did not necessarily apply. In today’s world, a couple could each have multiple jobs taking up all their time and energy as they struggle to make ends meet. People in the UK work the longest hours in western Europe.

While there was a problem with the bling-bling consumer culture, sometimes young people became involved in criminal activity because it was the only way they could see to help Mum to pay the bills.

One way of approaching the problem was to take a targeted and zero-tolerance approach to individuals identified as having leading positions in the loose organisations involved in youth violence.“Often, when they are dealt with and sanctioned, activity reduces in a particular area.”

Chuka Umunna is also concerned that central government has closed the Ending Gang and Youth Violence programme and replaced it by “a couple of civil servants and an email in-box”.

It was “a huge retrograde step”, apparently to save money. But, he says: “I don’t think you can put a price on the lives of our young people.”

Chuka Umunna is furious that the issue of youth violence was not mentioned in the recent Queen’s Speech setting out the government’s planned activity over the next year.

“I promised that when I was elected I would never let up on this issue and I’m not going to,” he says.

After the loss of life, one of the things Chuka Umunna finds most disturbing about the issue of youth violence is that “If we were talking about middle class kids who were all attending very smart, nice schools, this would be on the front page of every national paper for a number of weeks.