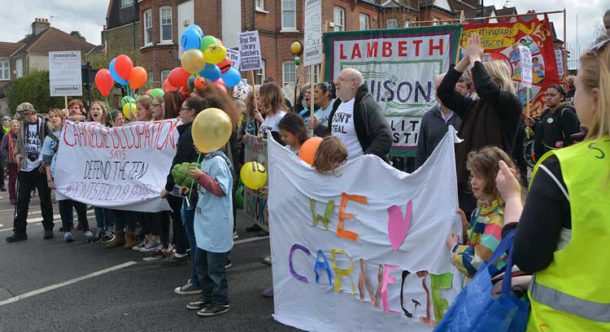 Friends of Carnegie Library will mark the 400th anniversary of the death of Shakespeare and the fifteenth day since the protest occupation of the library ended with a pop-up event outside the library tomorrow (23 April).

They will meet on the steps of the library at 3pm to perform readings and to create a human chain to “put a girdle round the library” as Puck girdled the Earth in Midsummer Night’s Dream.

The friends are expecting a good turnout for this celebration. “The pop-up events are intended to keep alive the community spirit that the Carnegie Library has always promoted,” said a spokesperson.

Come, and take choice of all my library,
And so beguile thy sorrow, till the heavens
Reveal the damn’d contriver of this deed.
Titus Andronicus to Lavinia
Titus Andronicus, Act 4, Scene 1

Me, poor man, my library
was dukedom large enough
Prospero to Miranda.
The Tempest, Act 1 Scene 2

Business tenants barred from the library have explained why they were unable to accept Lambeth council’s proposed alternative office space in Hub Brixton in Pop Brixton.

Tom Barton said the space was “in no way equivalent to what we had or what we need. Some types of small businesses may be able to hot desk with a small laptop, but we were nearly all at Carnegie because we required something more like proper office space.

“Nearly all of us need desktop screens. In the cases of the graphic designers, photographers and architect-type people these need to be large.

“Other folks like me are needing to work from reference materials and papers and stuff that you’d normally keep in an office.”

He said it was unclear whether the council could not comprehend this “or just wanted to be able to say it has made this offer”.

Another tenant, Andrew Clarke, said the occupation of the library began on Thursday 31 March and that access to the offices was no problem the next day.

“It was the council that prevented us from entering and they did this without giving us notice,” he said.

“I think we could have continued to work there while the occupation was in progress. Certainly, it was no hindrance to us. The two office rooms had key and code access and the council staff has a list of our names.”

He said that hot-desking at Hub Brixton had been the only alternative offered to the businesses and, contrary to what the council had said, he had not received an offer of a meeting to discuss the matter.

He said that he had to argue to be allowed in on 6 April. “The council official on the door said I couldn’t come in but was eventually over-ruled by another council official. I was told I could not stay long and was escorted to the office by a security guard.”

He said the business hub in the Carnegie had run since May 2014 and was a source of income to the council as well as a great place to work.

“A lot of people believed that the Carnegie could have paid its way without compromising library services and the desk rentals formed a central plank in the business case the Friends of the Carnegie worked on.”

A council spokesperson told Brixtonblog that physical work on converting the library to a healthy living centre with a gym in the basement is due to start in the autumn, after plans have been submitted and if they get through the planning process successfully.

He said that London Arts Base (LAB), which ran the offices for the council and had been in dialogue with the council on behalf of the tenants regarding changes to the lease and relocations, had been told on 6 April that the leases would be cut short.

The occupation, he said, had forced the council “to reassess the security of the building”.

It felt that, “rather than risk having to further restrict access to the businesses in future, it was better to relocate them so they could continue with their work. Changes to the leases and relocations would have had to happen within months anyway due to the proposed building work, this has simply brought that process forward.”

Other possible locations for specialist businesses would be considered if required.

Brixton Road outside the Tube station is the site for a new “green woman” traffic light signal. Transport for London (TfL) announced today on International...