Tibor Jones, Brixton’s only literary agency, has moved to a snazzy new office bang in the centre. The Tibor Jones Hub contains desk space to rent and is part of the agency’s new aim to work more closely with local creatives.

Tibor Jones was founded in Brixton by husband and wife duo Kevin Conroy Scott and Landa Acevedo-Scott in 2007, both local residents and active members of the community. The agency now has nine members of staff and a lengthening roster of authors which currently includes Wilbur Smith, Johnny Marr and New Order’s Bernard Sumner. 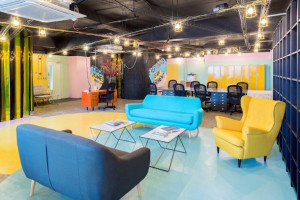 Faced with the prospect of moving out of their office in Piano House, where the growing team was previously based, they started looking for new premises last year. “It was incredibly difficult,” Landa tells me, “there’s a lot being developed [in Brixton] but hardly anything being developed into office spaces. Most of it is flats.”

Despite the difficulty they were determined to stay in the area: “We are the first literary agency to be based in Brixton,” says Landa, “Brixton forms part of our identity now. Back in 2007 when we started, people asked us ‘who’s going to come to Brixton?’ A lot has changed since then and now everyone wants to come to Brixton!”

After a long search they eventually found the space they needed,  above the O2 shop on Atlantic Road. They spent six months renovating it, decorating it to reflect their new brand and have now opened a swish new Hub containing desk space, a stylish meeting room complete with a wall made of 3,000 books and, of course, lots of bookshelves.

With desks at £325 a month (plus VAT) it’s a pretty competitive deal, and they’ve already had interest from several local freelancers. Landa is excited about the prospect of collaborating and exchanging ideas with others: “It would be amazing to work with people who are doing really interesting things in Brixton…there’s a great energy around Brixton and we want to embrace that.”

As well as the new office, Landa and team are launching the Tibor Jones Studio, an initiative to create and publish their own fiction. This sees them move away from the traditional agency model and into content creation. Landa explains the process: “It’s essentially fiction packaging…for example, we might have an idea [for a piece of fiction], then we discuss it in-house and if the idea is strong enough, we get two writers to develop the idea with our editor Joe…it takes time, because we need to ensure the quality of the work, and so that we can take care of the writers.”

They are also planning to launch TJ Sundays – free afternoons for budding writers with workshops, talks and sessions with established authors – and are considering having a writer-in-residence. As well as these projects, they remain on the lookout for new material and encourage local authors to get in touch. “Everything that gets sent in gets looked at,” says Landa. So if you’ve written any fiction, head to their website to find out how you can submit it to them.

Their bi-annual Pageturner Prize offers £1,000 and free representation to budding new writers, and previous winners and runners-up have gone on to win major literary awards and publishing deals. We interviewed last year’s winner, novelist Alex Lester. The next one will be opening later this year, so get writing!