January 2016 sees the launch of a new Brixton-based record label by Laid Bare organiser and local musician Rami Radi, with an event celebrating the first EP release at the Ritzy on 14 January.

The new record label goes under the name Laid Bare Records and builds on over two years of the Laid Bare Live nights giving local unsigned talent a platform to bring their music to a wider audience. The first release is an EP from singer-songwriter Chris Belson.

Rami began organising music nights while at university in York, and then took part in an open mic night in West London on moving back to the capital.

This inspired him to set up something similar in South London and Laid Bare was born in July 2013. It began at the Ritzy as an open mic night and developed over six months into an acoustic night, with Rami finding and booking all of the acts.

The Laid Bare nights have now grown to include regular events at the Ritzy, the Century Club and Fu Manchu. Sister night Laid Bare Presents also takes over the beautiful Brixton East venue to showcase the most popular artists as well as many established performers such as Childhood, Benny Tipene, Killa Kela,and One Man Destruction Show from Fat White Family.

Having now attended many of these nights in different venues, the quality and eclecticism of local talent never ceases to impress me. Rami’s gift for not only finding these brilliant performers, but also choosing such appealing venues, means that the events always draw a crowd.

The first release for Laid Bare Records is an EP by singer-songwriter Chris Belson entitled Moon Songs, which includes five new songs from this dulcet-toned performer. With a very indie edge to his acoustic stylings, recent reviews have compared his sound to Radiohead and Sigh No More-era Mumford & Sons among others. The EP was released on Friday 8 January and can be found on iTunes, Amazon and Spotify.

Laid Bare are celebrating the launch of Moon Songs with an event at the Ritzy on Thursday 14 January. Entry is free and there will be performances from a selection of Laid Bare artists as well as the opportunity to see Chris perform. Get involved by joining on Facebook.

Another of Chris Belson’s many talents is as an illustrator, and the first 25 purchases of the CD during the launch party will receive one of his prints. You can listen to Chris via his SoundCloud page or visit his website. 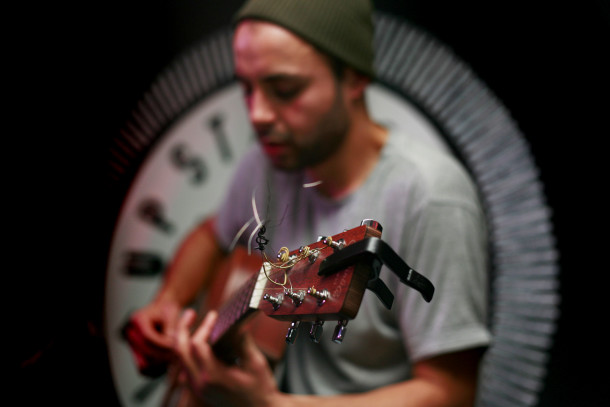 The man behind the label, Rami Radi, variously a musician, producer and mixer, cameraman, video editor and podcast host, has big plans for Laid Bare. He’s clearly very passionate about the project.

His main vision is to “shine a light” on all the hidden talent that we have so close to home. He’s currently looking to expand the live nights to incorporate more venues, with the Fu Manchu shows now taking place on a weekly basis. He also hopes to have four releases on the label this year, and is already planning the second, although he’s not revealing who the artist is yet. Watch this space…