On the side they also run The Makeshift Cinema, a film festival dedicated to giving short films a big screen outing. On Sunday 16th August, Florence and Kat could be seen buzzing around the Event Space at Pop Brixton, making final preparations and handing out programmes before the start of the festival.

13 films, including docs, animations and dramas were shown, with stories ranging from Indian soldiers in WWI, to the issue of gentrification in Brixton.

I caught up with Florence and Kat a couple of days after the festival.

When and how did you guys meet?

Florence: We went to the same uni, London College of Communication. We were doing the Graphic & Media Design course. When we finished we were both keen on doing something  straight away on our own. It ended up becoming Aperio Films.

When did you start Makeshift Cinema and why?

F: I was making films and wanted to get them into film festivals, but they were all quite expensive to submit films to. So in my second year at uni I did a film project in my back garden where all the equipment was found and free. My boyfriend built a screen. We found this big block on the street and turned it into a bar.

Kat: We had a sheet for the screen. All the chairs were from friends’ houses. We had lights around the garden. It was quite mix and match, which is where the Makeshift name comes from. Kind of, let’s just get it together and do it.

F: It was all just people helping out. I got films from people at uni. Some of Kat’s films were in it. Sometime after we left uni and set up Aperio, we felt we really wanted to do a not-for-profit community project and thought, why don’t we do Makeshift on a larger scale.

Where was the first official Makeshift Festival held?

K: The Counter Café in Hackney Wick. We had a lucky situation where a friend of ours who’s a music producer was living next to Counter Café. We got him involved and said, if you set up the location we’ll sort everything else out. Pop Brixton was the first time projectors and a screen was provided so it ran a lot smoother.

F: The first year was thrown together. It was incredibly stressful but worked really well. We have another Makeshift in September at Peckham and Nunhead Free Film Festival. Our selection will be theme-based. They’ll all be about South London or produced in South London. 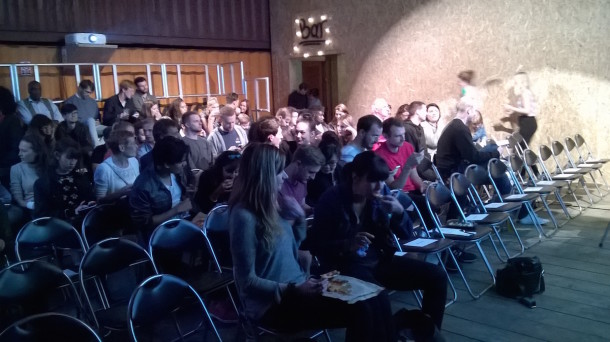 Would you show in a cinema?

F: Although you can never say never. If there was an opportunity to get more filmmakers work shown out there, great.

I’m guessing you get more films submitted than you can show. Besides the length criteria, how do you decide what to screen?

F: We do get quite a lot submitted and it is really hard because we want to show as much as we can, but you can’t really be showing for more than an hour or so. Generally I’d say we look for good quality, a good story or strong character. Sometimes that could change. If you’ve got this amazing story but the quality’s not great, we might put it in.

K: If we can represent a broad range of films that make people think in some way, or perhaps it’s something they haven’t seen before, that’s what excites us.

F: We love them all.

You can find out more about Makeshift Cinema at www.themakeshiftcinema.com