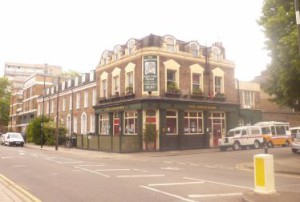 Developers have reactivated plans to turn the top floors of the Grosvenor Arms on Sidney Street, SW9, into flats.

Proposals by Golfrate, the building’s owners, to convert the pub’s top floor into flats were rejected by Lambeth council in August last year.

Residents and local groups had complained that building luxury flats there would lead to inevitable noise complaints and affect trade in the pub below. According to the application, the upper parts of the building would be extended to form four residential flats while retaining the public house at the bottom level. The closing date for comments is Thursday, March 19, and so far only three have been registered.In its objection to the development Brixton Society said: “Accommodation above public houses was traditionally for the publican and his/her family and/or pub staff. Such residents would be keeping the same hours as the pub and, much more to the point, have a very strong interest in keeping the pub open and successful.“Such considerations do not apply to people without connection to the pub business buying or renting accommodation above the premises. Complaints from such residents to the inevitable noise from a pub can quickly lead to licensing restrictions which make the pub unviable.“Public houses are not only businesses providing local employment, they are important community assets where people meet and socialise. As more and more pubs and similar facilities close, we are in danger of turning our neighbourhoods into glorified hotels where people live with no connection to their neighbours.”Not long after the original application was submitted the Grosvenor indeed closed. At the time Brixton Buzz reported that “with a large luxury apartment block opposite set to welcome its well heeled residents, and proposals to convert the upper floors into residential flats, the landlord decided to leave before the complaints came in.”Although the application says the bottom of the building will remain A4 (pub or restaurant), the ground floor of the pub has been gutted with the bar and other fittings taken out, meaning the future for what was once a popular local remains uncertain. To have your say visit the Lambeth planning website.

Food for the hungry, frightened and forgotten – it was a...