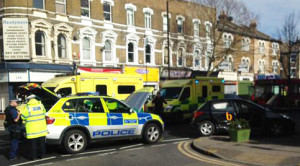 Acre Lane has reopened following a collision between a Police Armed Response Vehicle on its was to an emergency call and another car.

Police said they were called at 11.55 am today to reports of a road traffic collision on Acre Lane.

The crash between the Armed Response Vehicle and a Peugeot 207 happened at the junction between Strathleven Road and Plato Road.

The female driver of the Peugeot was taken to a South London hospital but is believed not to be seriously injured.

Road closures were put in place while officers dealt t with the incident.

London Ambulance Service said: “We sent an ambulance crew to the scene and treated a man reported to be in his 30’s for whiplash.”