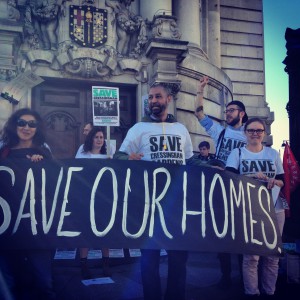 Residents campaigning against the demolition of Cressingham Gardens estate have been struck a blow after Lambeth council declared refurbishment will no longer be an option.Estate residents received a letter from Cllr Matthew Bennett, Cabinet Member for Housing, which said the council was withdrawing refurbishment options because they are too expensive.Last month, residents accused the council of “grossly inflating” the estimated cost of the repairs needed for refurbishment.The debate over Cressingham began in 2012 when the council announced regeneration plans that included the partial demolition of the estate.Five options were put forward ranging from full refurbishment of the estate (Option one) through to complete regeneration (Option five).Residents heavily favour option one.However, in the letter Cllr Bennett said the council has assessed the refurbishment options (one to three) and found them to be unaffordable and so, at a Cabinet meeting on March 9, the council would recommend that these options not be consulted on any further.Cllr Bennett, said: “We’ve been consulting with Cressingham Gardens residents about improving the estate for two years. We’ve worked with them on the estimates of the cost of refurbishing the estate, but even on the most conservative and optimistic forecast it would cost three times what the council can afford just to refurbish existing homes.“Instead we will work with residents on plans to regenerate the estate and address the repairs needed to bring their homes up to the Lambeth Housing Standard.

“This will be a council development; the estate will not be sold to a private developer and all residents, whether tenants or homeowners will have the right to remain on the estate with options tailored to their needs.”The Green Party described the decision to withdraw the refurbishment option as an “appalling betrayal”.Jonathan Bartley, the Green Party candidate for Streatham, said: “The residents have every right to be furious. This is an appalling betrayal of Cressingham Gardens residents who have worked closely with the council in the hope that their observations and wishes would be carefully regarded. They showed Lambeth Council where appropriate savings could be made, appealed to their sense of community, but have ultimately been ignored.”“The consultation appears to have been a sham, and little more than bureaucratic process which has masked political sleight-of-hand.”

Starting from March 3, Brixton Blog will be exhibiting The Faces of Cressingham Gardens series at Upstairs at the Ritzy

Brixton arches evictions: “we won’t go down without a fight”