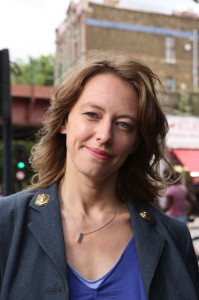 Rosie Wilby’s career can be almost too neatly divided between her North London days when she was performing as a musician and her South London present, where she performs as a music-loving comedian. But, it’s not quite that simple: musician-turned-comedian is just the beginning. Rosie is also a writer and broadcaster (catch her on Resonance FM every Tuesday), as well as gay issues researcher, social commentator and feminist.

Rosie’s London story began when she was doing the gig circuit with her band in the 90s, Wilby, living in Camden. “It was me and my songs and a bit of rotating cast of musicians. It lots of fun at the time,” she tells me. Her first foray into comedy was the “between-song banter” which “people seemed to like” at her gigs.

Rosie got the idea that her funny filler chat was in fact one of her selling points, something unique about her performance. “I was just trying to say something funny or self depreciating, between my songs, a lot of which were wistful and romantic… the asides were getting longer and longer and I’d eventually get around to doing a song in my half hour set.”

The appreciation of her audiences at gigs gave Rosie the confidence to enter the Funny Women competition at The Comedy Store, London. Her audience were right to laugh, – she made the finals in 2006. What does she love about the comedy that being a musician hadn’t given her? “A gloriously free connection with the audience.”. For the first time, there was nothing to hide behind, no band, no set, no warm-up time, just her – “It was a very liberating thing”.

Rosie was reluctant to mash together her music and comedy sets, as might have seemed the obvious path for her, but has managed to incorporate her experiences in the 90s music scene in her work. “I did a show in 2011 in Edinburgh called Rosie’s Pop Diaries which was based on the column that I’d written in [the now disbanded] Making Music magazine. It was a behind the scenes look at trying to make it and all the stupid things you do when you’re on the gig circuit.” 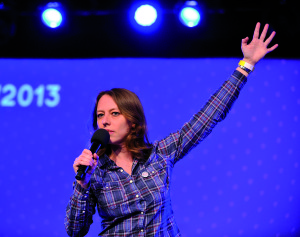 Bringing together photos, memories and excerpts from her previous columns, Rosie’s Pop Diaries was a “story telling comedy music show” which ended up being bluntly retitled in Rosie’s signature style of self deprecation: How Not to Make It in Brit Pop. The show was  “a real mix of stuff; I think people really liked it, but it was difficult to know which section of the programme to put it in”.

Rosie’s latest show, Nineties Woman, also draws on her own past.  “It’s a kind of detective adventure, where I go back and trace the personal histories of the group of women who set up Matrix, [York University’s feminist newspaper, which Rosie used to write for]”. The show also makes “one or two subtle points about feminism and where we got to” Rosie tells me.

On her own journey into feminism, Rosie confesses her involvement with Matrix was “nothing to do with ideology or politics, I just had a bit of a crush on the woman at the centre of the collective.” Nineties Woman is a “light-hearted look at my personal journey, finding [an] identity and the slightly misguided attempts to be noble,”.

At the end of her show, Rosie likes to ask her audience ‘who here would describe themselves as a feminist?’ and she is amazed by how much controversy the word still causes. “The word seems to have been aligned with just one type of feminist, a very radical separatist type of feminism which can’t possibly include men. What’s really nice is when there are lots of men who say ‘yes I’m a feminist.’”

Troubles with the F word aside, Rosie’s most controversial show to date is, hands down, ‘Is Monogamy Dead?’ which has been shaking up audiences since she first performed it at Edinburgh in 2013. “The show looks at the origins of monogamy, as well as what it does to us emotionally. There’s a lot to it, a lot of layers.”

Performances of ‘Is Monogamy Dead’ have been requested by Science and Philosophy Festivals so it’s audiences (both appreciative and unsettled) continue to grow. “It’s funny really because these are some of the best audiences I have had for the show; they’re just ready to get involved and get questioning.”

Rosie will be reading from her new memoir, How Not to Make It in Brit Pop at the next Brixton Book Jam on 2 March. Find out more about Rosie and her next stand up dates by visiting www.rosiewilby.com