Borne out of an event held to mark International Women’s Day last year, it had become obvious to Brixton Live’s Leah Whittingham that there were plenty of LGBT women in Lambeth who wanted a group to share their experiences.

“We wanted to do an event about different generations, looking at the different experiences. As we started talking about it, more people started telling us that there isn’t anywhere to share these stories. 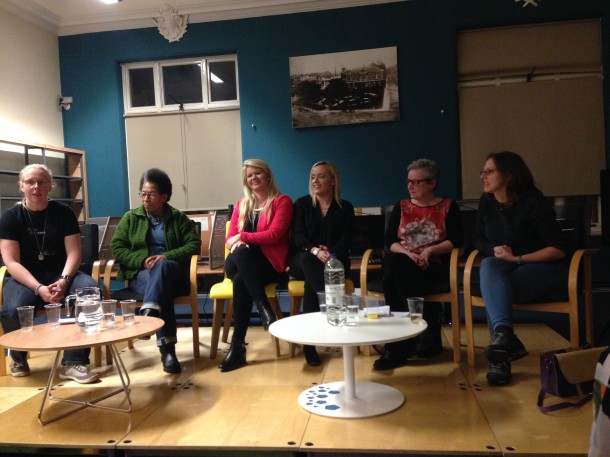 “This evening we experimented with the discussion, performance and a short film, and there is scope to do more.

After a brief welcome from the Head of Library Services, Susanna Barnes, the evening kicked off with a play written by Amie Taylor and performed by Taylor and Mary Price O’Connor, called Princess and Princess (below). 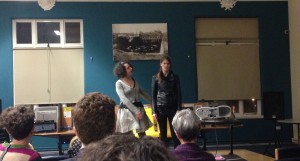 Navigating the difficulties faced by LGBT women when looking for other women, the headline quote: “Sometimes I pretend I’m a princess in this city. Lost. I’m looking for another princess, but they’re hard to come by. Or at least, I think they are,” resonates with anyone trying to find love in London.

Taking questions from the floor, the team discussed role models and the lack of them for LGBT women (Martina Navratilova and Ellen DeGeneres were mentioned more than once), different coming out experiences and what advice they would give their younger selves: valuing friends, living your own life, not stressing about finding a life partner, realising you’re not the only lesbian in the world and having more sex.

The discussion showed that the coming out journey is a never ending one, a point made sadly all the poignant by an example of a young woman forced to leave home by her parents because of her sexuality.

Even though society is moving on and becoming more accepting as a whole, individual attitudes can be harder to change. Different generations have different experiences, but perhaps surprisingly, it isn’t as simple as assuming older lesbians always had it harder than those in their early and mid twenties.

Rosie’s story of her mother, who upon realising her daughter was a lesbian, told Rosie about her old girl friend she’d holidayed with before marrying her husband, different hugely from Kentucky native Whitney, who faced being initially shunned by her friends in church.

Whitney Bacon said: “Events like these are so important, and they’re quite rare. It’s great to share experiences across different generations, and the different stories we’re hearing tonight shows that.”

Whittingham said: “It’s important to come together and meet people, face to face. It’s easy to go online and find the community but face to face contact is much stronger.

“There have been local organisations and networks for women, but due to cuts there aren’t as many around here any more, and that makes this even more important.

“If you’re feeling troubled, sometimes it’s nice to hear from others who’ve been through the same thing. You don’t have to participate and share your story, but it’s nice to feel that you’re part of something.

“Some people will find it useful to be able to speak and share, but it’s different for everyone. If you don’t have these chances, these role models, clubs and bars, you feel invisible. Everyone likes to relate to someone they feel similar to.”

The evening concluded with a short film by Angie West and Jackie Nunns; “Another Woman’s Scent”, taking the words from artist Sarah Reilly’s poem about transitioning, based on a true story.

Brixton Live hopes to organise more events for women and the LGBT community.

Upcoming events by Brixton Live include the Women In Arts talk at Photofusion Gallery on the 17th March at 7pm, in celebration of International Women’s Day. For more details, go to http://www.brixtonlive.com/ or find them on Twitter @Brixtonlive. 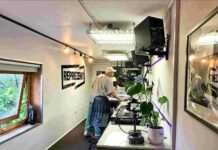