A photography exhibition about the NHS has opened at Streatham Library. Arts writer Gargie Ahmad went along to the launch. 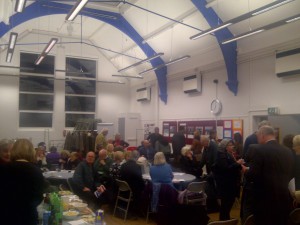 The photographs show headquarters and clinical sites of multi-national corporations and the NHS healthcare services that they run. Speaking with the panel, Marion added that ‘these buildings…represent a lot of wealth. It is difficult to put in figures, because there are so many different ways to measure profit.’ She had at times been challenged for taking photos of the buildings from public streets.

Jan O’Malley, chair of Lambeth KONP, said that the exhibit and event was important to ‘spread the word, as the media have conspired to keep it [NHS privatisation] a secret. Working behind the same NHS logo confuses people, and we need to understand what is going on’. She thanked the staff at Streatham Library, who kindly volunteered to keep the library open into the evening.

Speakers included Jim Dickson, Lambeth Cabinet Member for Health and Wellbeing, and Labour Councillor for Herne Hill, who said ‘the NHS is in news for all wrong reasons…competition is placed above patient care.’ Jim warned against TTIP, the Trans-Atlantic Trade and Investment Partnership under negotiation between the EU and USA, and the importance of ensuring that TTIP cannot place procurement regulation on the NHS. 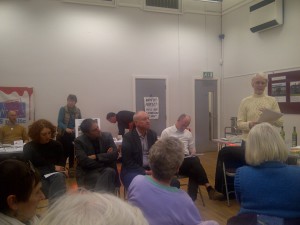 Frank Wood, biomedical scientist at King’s College Hospital for nearly 25 years, and member of Unite Executive Council for health, pointed out that 16 different companies run King’s College Hospital. Reviewing the impacts on hospital staff, Frank saw a situation of a 2-tier workforce, and fragmentation of services.

Jonathan Bartley, Streatham Green Party candidate, described how he had grown up with the NHS, as his father had been an NHS doctor since its establishment. He outlined three priorities: further marketisation and privatisation of NHS services should be resisted. TTIP and other political pressure towards it should be resisted. The NHS needs proper funding, as ‘the values of a society can be seen where it spends its money. The money is there, but it is in the wrong hands’.

Unjum Mirza, Streatham candidate for the Trade Unionist and Socialist Coalition, said that ‘The predication of the NHS simple: you do not treat a wallet, you treat the illness’. He highlighted that problems of staff recruitment and training were critical to the NHS and needed support. And finally, Kat Hobbs from the Campaign Against Arms Trade pointed out that UK military spending might rather be directed towards supporting our health services, saying ‘We want a society that values welfare over warfare.’

Questions followed every speaker, and the audience passionately discussed the issues of the evening. One lady offered a perspective from the USA, where she had seen the inequalities of private healthcare, and emphasised the need to talk about tax: we need to make clear the difference in what people might pay under a private health system, and how little they pay through National Insurance contributions.

Campaign group 999 Call for the NHS gave a shout-out to all other NHS campaign groups to join together on the 14th February for a national day of action to voice support for keeping the NHS public. Other ways to learn and engage include joining or forming patient participation groups at GP surgeries.