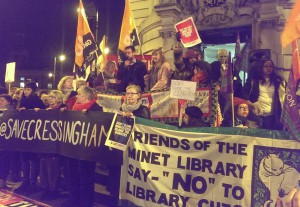 Lambeth council is to slash £30 million from its spending over the financial year 2015-16.

The cutback, agreed at a full council meeting on February 25, is the first part of a £90 million package of reductions to be made over the next three years.

Targets for cutbacks this year include library closures, children centres and “integration” within the council’s health programme.

News of the dramatic scaling down of council expenditure – imposed by the government – was greeted with dismay by campaigners outside Lambeth town hall.

“As well as libraries, children’s centres and day centres are also in the firing line,” said Jon Rogers, Lambeth Unison branch secretary. “We will contest every single cut.”

Others involved in the protest included the unions GMB, Unite and the National Union of Teachers, as well as supporters from the “Save Cressingham” campaign, Guinness Trust activists and protesters of the cuts to Lambeth’s Libraries.

“Labour councillors have meekly passed on the cutbacks from central government, saying they have ‘no choice’ and are doing it ‘with a heavy heart’,” said Steve Nally, Dulwich and West Norwood prospective parliamentary candidate for the Trade Unionist and Socialist Coalition (TUSC).

“We say councillors should stand firm and refuse to implement the cuts.”

But Paul McGlone, deputy leader of the council, defended his colleagues’ actions.

“Over a six-year period our core funding has been cut by 50 per cent by central government. It is a fact that their funding settlements hit the most deprived areas the hardest.

“We have managed to freeze council tax across Lambeth for the past six years but we’ve got to increase it by just under 2 per cent to bring in extra funds, which will be about £5.7 million, to mitigate the government’s cuts.

“People are of course entitled to their right to protest, but as a council we have to spend within our means. We’re required legally to set a balance budget. We are not a party of government, we do lobby ferociously through the right channels and through our party. But locally we have to live within our means and set a balanced budget.”