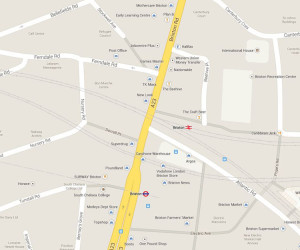 Diesel fume pollution in Brixton Road has almost breached the legal limit for the whole of 2015 – after only four days of the new year. This makes it one of the worst affected streets in Britain, say experts.

The campaign group Clean Air in London have also discovered that Oxford Street has already breached the annual pollution limit for the year when it posted its measurements on January 5. It added that Brixton Road is set to follow suit any day now.

Simon Birkett, the group’s director, said London has one of the highest air pollution records in the world.

High levels can stimulate the development of lung and heart diseases and puts people with existing conditions, such as asthma, at risk of serious ill-health.

The EU limit set for nitrogen dioxide (NO2) levels to be above 200 micrograms per cubic metre (ug/m3) is 18 hours in a year.

And already Brixton Road is approaching breaching its 18 hour limit.

Clean Air in London also found that Brixton Road’s average concentration of NO2 in 2014 was 149 ug/m3. This is far above the recommended average of 40 ug/m3, and even tops heavily-polluted Oxford Street’s 139 ug/m3 per year – even though the West End’s major thoroughfare is temporarily worse this year so far.

Birkett said London must ban diesel from the most polluted places by 2020. He accused Mayor of London Boris Johnson of doing too little to tackle diesel pollution. Birkett branded Johnson’s proposed ultra low emission zone (ULEZ) in central London by 2020 as “too small, too weak and too late”.

Lambeth is in fact one of four London councils – alongside Camden, Hackney, and Southwark – to urge TfL to “dramatically expand and advance” proposals for ultra low emission zone in central London sooner than 2020.