The day the internet went mental for a Brixton business and its Jesus selfie. 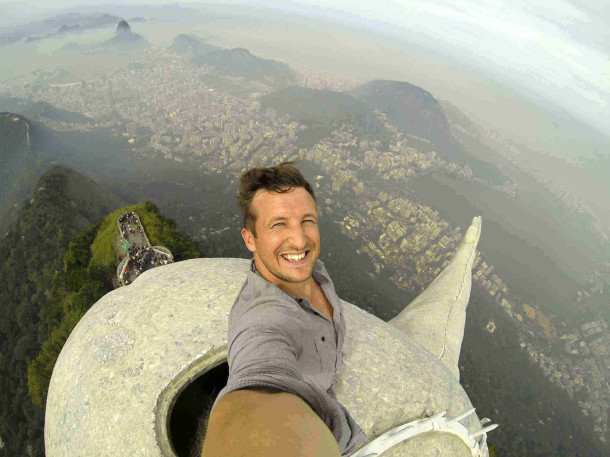 “We didn’t sleep for about four days – our phone wouldn’t stop ringing!” laughs Radha Vyvas. Lee Thompson echoes;”Richard Branson was tweeting us, Ricky Gervais was talking about us in America…..it went mad!”

Co-founders of local tour company The Flash Pack, former charity consultant Radha and photographer Lee, are still incredulous at the sheer impact this little video had on the internet this summer:

“I did the selfie in May”, explains Lee, “and released it just before the start of the World Cup in Brazil.”
Radha says “We knew the video had potential but we had looked at it so many times that in the end we were going ‘will anybody share it?’ ‘What do you think?’ and ‘It might not even go viral’…..” They published the video onto Facebook, Twitter and emailed it to Mashable three times without any response. Ten minutes went by without anyone even ‘liking it’ on Facebook….then whoosh! A news agency got in touch and the rest is history.
“Not bragging, but I think it’s up there with the most viral pictures ever,” says Lee.
Radha adds, “I calculate that probably more than one hundred million people worldwide has seen it, on TV, CNN, in newspapers…. You can’t calculate the advertising gained from that! It would have taken us years to achieve this kind of marketing! Richard Branson said he was jealous, yayy! The travel industry is a very congested market and we managed to stand to stand out.”
“It’s priceless!” agrees Lee.

For a couple who decided to set up a travel company for professional singles on their first ever date (“In Brixton’s Market House pub two years ago”) and whose first holiday together was in Sierra Leone, expect the unexpected sounds like it should be their slogan. Their tour company The Flash Pack specialises in taking groups of 8-10 travellers on a two week holiday which aims to pack in so many unique experiences that it should feel like having been away for a lot longer.
“Our ethos is that you should feel like you have had a two-month experience,” explains Radha passionately, “so not coming back feeling totally knackered but having gotten under the skin of that country so much so it feels like you have had a two month holiday.” She continues, “Our tourists don’t want regurgitated Burmese history, they are more interested in ‘what’s life like for a Burmese woman now?’ ‘What’s the price of a flat now compared to years ago under the military rule?’ ‘How much is it to go out and eat a meal?’ ‘What’s the average salary?’ Our tourists want to really get under the skin of the country they visit.”

Lee and Radha aim to unearth experiences and locations that are not found in the usual tourist guides and think nothing off veering away from the beaten track. They take their research seriously:
“In Myanmar for instance” says Lee, “there is a really good Sauvignon Blanc wine, so we will teach people about that and go wine tasting there.”

The couple is adamant that tourists have a certain social responsibility when they travel and are keen to expose their travellers to less than glamorous sides to a country in a bid to spread the money around to local businesses.
“Our India tour is more to do with getting an authentic experience, so we will be going to shanty towns“, says Lee. “These are amazing areas and we want people to get in a little bit of charity work as well. Like our Brazil trip, where we go into the favelas. If you do it properly it is not voyeuristic; there’s a great sushi place there for instance!”
Radha adds, “We use local businesses in the favelas and stay at local guest houses. The favelas are pacified now and there are businesses popping up all the time. We are providing employment, we make sure we spread money out, eat at a local restaurant, go to a local café….we can stay at the Hilton but then the local communities won’t see that money. We are really keen to show that as a tourist you can choose where to spend your money and that you can make a significant difference making sure the money gets to the local communities. We tend to leave it up to the group whether to stay in the favelas. It’s really good fun but noisy, not much sleep!” She laughs.

Christmas constitutes a brief lull spent at home in Brixton this year, with a Flash Pack team drinks in the newly re-opened Tulse Hill Tavern. Then, it’s business as usual as Radha leads a group trip to Myanmar on New Year’s Eve and Lee leaving heading the Vietnam tour on 5th January. Then, of course, the pair needs to build on the momentum their celebrated selfie brought their company. As a result, an even more aspirational selfie is currently being planned. Lee admits he is putting a list of potential locations together in an attempt to beat his last selfie but refuses to be drawn on any details in case someone beats him to it.
“I think I can better it (the Jesus selfie)! I don’t want to do Big Ben, and I have already seen people abseiling down the Shard….we’re thinking big, we are not just going to sit there.”
“Watch this space!” laughs Radha.