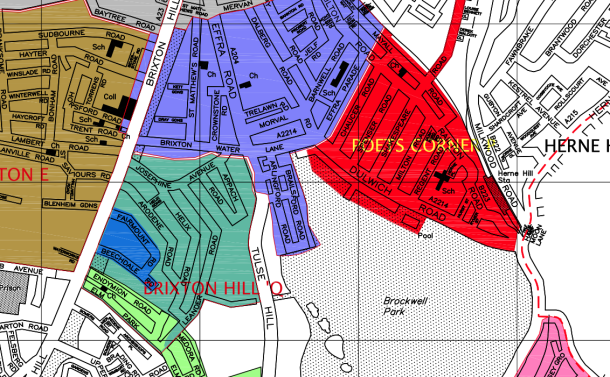 After eight years of excuses from Lambeth Council, Brixton Hill residents are still campaigning to get the review they were promised back in 2006 when their No Parking scheme was introduced.

The collection of roads east of Brixton Hill, referred to as “Controlled Parking Zone ‘Q’”, were one of the first enforced parking areas south of Brixton Town Centre. This was initially welcomed by locals who at the time were plagued by commuters clogging up their streets and being used as the Tube Station car park.

The initial questionnaire sent to residents was pretty basic and only asked what times the cars arrived in the morning and when they left in the evening? (There was no mention of how parking schemes could work using shorter hours). However, this was not thought to be of too much concern as the Council also promised further community consultation after a six month trial period.

But that consultation never happened and ever since residents have been stuck with a whopping ten hours no parking restriction, Monday to Friday; a scheme many believe is designed to create maximum revenue for Lambeth Council rather than solve any local parking problems.

Interestingly, subsequent Controlled Parking Zones implemented south towards Streatham have not adopted these long ten hours restrictions, opting instead for shorter two hour periods which have proved to work just as effectively at deterring commuter parking while not inconveniencing the people who live there.

The local resident association, The Josephine Avenue Group, has asked numerous times over the years why the promised review never happened? This has been answered by claims that both the then local councillor and the chairman of JAG were asked for their opinion (this has been denied by both parties). Even if true, this is not what residents were promised and there is still no evidence of any community consultation ever taking place.

The most recent action (together with Herne Hill Poets Corner residents who have the same problem) has been a 600 strong petition asking for the hours of operation to be reduced to a more sensible two hours a day. This would deter commuter parking, but still allow residents to receive deliveries, friends to visit, service vehicles to park and normality to return. However this was answered by a dismissive letter from Lambeth Council stating that “We acknowledge the concerns of all residents regarding parking and traffic problems”  but such a review “is often a lengthy and expense process”. The letter finishes by saying “I have made a note of your request so that it can  be followed up when resources become available”. A sentiment heard before by residents and now not believed.

Residents have since been advised by the Ombudsman Service to lodge a formal complaint with the council and, if not satisfied, ask them to investigate why due process has not been followed.

This all comes at a time when the Government is looking to introduce new laws in January allowing residents to challenge Local Government on unfair parking restrictions. Local residents are also becoming distrustful of a Council who claim to be “Cooperative” yet have repeatedly ignored their promise of public consultation and failed to follow due process.

Unlike the Council, campaigners say they will keep their promise, and fight until this battle is won.