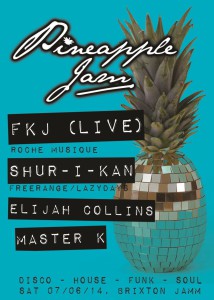 am has only been going since April this year, with the aim of showcasing DJ’s and producers within the realms of Disco, Funk and funky Deep House both established and underground. Swiftly becoming a night to catch fresh live acts, their next party at Brixton Jamm they will be bringing established artist Shur-i-Kan and up and coming headline act FKJ, who himself  had his live London début in April at Lucid London’s Easter Party will be returning to Brixton for what will be his second live appearance in the capital.