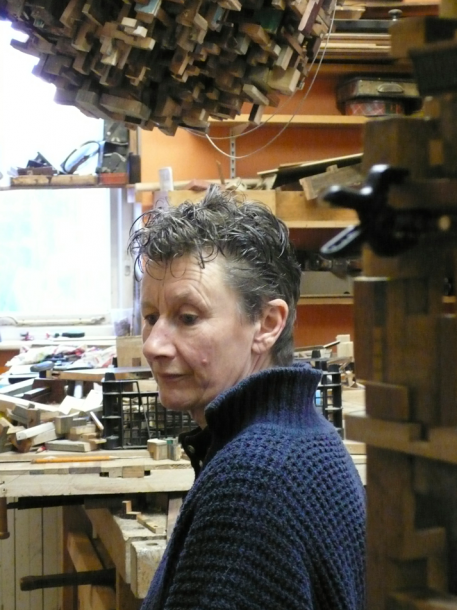 Before I can actually see the number on Lesley Hilling’s door, I can see the beginnings of a wooden construction peeking out from the front window. An artist whose work and life are completely inseparable – “the only way that makes sense to me” – Lesley’s Brixton co-op home is part workshop, part museum with panels of the walls made into intricate cabinets and cases and conventional doors replaced with magnificent structures made up out of the lost, found and reborn.

Home is very much at the heart of Lesley’s work, with her first career as a graphic designer inspired by a dislike of leaving the house: “I didn’t like going out and going to school and I knew you could do [graphic design] freelance… I really don’t like the whole idea of being away from the house for eight hours.”

During her time as a graphic designer the profession as she’d known it completely changed, with drawing boards being replaced by computers. “You just had so much more time. I did try animation to fill those hours but  I also started making small box constructions to do something with my hands.”

“I started making all these wooden things, and was quite successful at first. I was with England and Co, and they would sell a lot of the work… I was always making new work.” Although at first Lesley sold her work, increasingly she began using each piece as a way of getting better at her craft. “It wasn’t until early 2000s that I started to be shown by other galleries” and it’s only now that Lesley is able to live on the profit of her artwork, although she attributes her ability to do this to her very frugal lifestyle.

Having been exhibited by Knight Webb gallery previously, Lesley is really enjoying working with gallery owner Rufus, but his first choice of which piece to display surprised her. “When Rufus came round here and said he’d like to display my tower in his front window, I was very surprised. I was about to burn the piece and film it going up in flames…but looking back on it I can see why it fitted [with the rest of the abstract expressionist work].” She is naturally very pleased to now have her own solo show at the gallery.

Lesley’s work has a very distinctive visual impact, bombarding the eye with tiny pieces intricately interwoven into three dimensional structures, but she has no formal artistic training. When Lesley started making boxes she “didn’t really know anything about arts” and picked up tit bits of information and inspiration from her partner Nell who studied art as a mature student and is also a practicing artist. “I was very taken by the work of Joseph Cornell – the boxes he made just seemed so similar to the ones I was making”.

Lesley’s process of making things has been a natural evolution, turned off by “art that’s top heavy with theory”, her pieces are made primarily for her, with many never making it out of the workshop. “I don’t really set out to do anything but if I step away from [my work], I can see that it is all about me and my mum and a kind of nostalgia that I have for her past… I’m so nostalgic for a time I never knew.”

“I don’t think my Mum was very happy in the sixties and seventies and she was often looking back to the war which was her peak. All this [nostalgia for the thirties and forties] feeds into my work… as well as the fact that I come from a family of collectors. My family didn’t really throw anything away and it all came to me. I wanted something to do with all those pieces.” With a sense of nostalgia driving her work, the objects that Lesley is drawn to “have to be properly old and have some sort of resonance. And also things which look a bit strange.”

A regular car boot forager, Lesley also keeps her eyes peeled for other urban ephemera at junk shops, in skips and at the end of house clearances. “People bring me stuff or tell me where stuff is lying around. People in the community have got to know my work and the kind of materials I’m looking to work with.”

Telling me about the multitude of ways she finds objects it’s striking how rooted Lesley’s work is not only in her own family’s past – a lot of her artwork is made up out of old things collected by her parents and grandparents – but also in London. “I’ve lived here thirty years and I don’t really know anything else. The [Brixton housing co-op community] I live in has a lot of different artists and makers in it and gives a lot of opportunity for cross fertilisation, as they say!”

Gaining artistic inspiration certainly doesn’t seem to be a problem for Lesley as she tells me “there’s too much [in my head] and not enough time to do it! I’ve got two or three year’s work of things in my head right now – I don’t really have a problem finding inspiration.” Although each piece can take up to a year to finish working on, Lesley could never be accused of being precious about her work: “Often if I’ve finished a piece and I’m not selling it, I’ll take it apart and re-use all the different components. As long as I’ve photographed it, that’s the main thing I think.”

Lesley’s pieces, both finished and in process are a visual feast; with a multitude of intriguing components, interwoven into a mesmeric whole, you have to take your time to work out what you’re actually looking at. When I ask Lesley about what she wants to run through people’s minds when they see her work, she responds “that it’s magical. I want to them to sense the magic of art and the evocativeness of the past.”

Lesley Hilling’s solo exhibition is on display at Knight Webb gallery until the 5th of April. Go if you can. You can also find out more about Lesley and her work by visiting www.lesleyhilling.co.uk 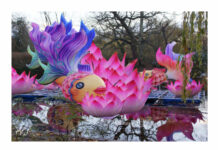