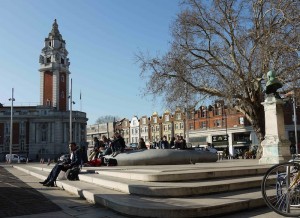 A civil rights activist has likened a police and council crackdown planned for central Brixton tomorrow to the Swamp operation which went on to spark the 1981 Brixton riots.

Lee Jasper, vice chairman of the Lambeth Community Police Consultative Group (CPCG) and a former race relations advisor to the London Mayor, likened the planned operation – called Brixton Unite – to the Swamp 1981 on his blog – saying that neither the police nor the council had attempted to consult with the community about the controversial plan.

But the police and council claim the event is a “community safety” event, including a range of organisations and partners. Windrush Square will have a number of stalls offering advice to encourage young people into education, employment and activities run by Job Centre Plus, Street Doctors and Dance United London Academy.

Meanwhile, Jasper claims in his blog that Trident anti-gang raids, weapons searches, truancy teams, traffic stops and UK Border Agency patrols we be in place in central Brixton throughout the day tomorrow (Thursday), all filmed for a BBC television documentary.

He told Brixton Blog: “To have such a heavy concentration of activities in a confined space in Brixton demands community consultation – but there hasn’t been any.

“This is of extreme concern, particularly in light of the recent Mark Duggan and Sean Rigg inquest verdicts – relations with the police are very sensitive at the moment.”

He claims the CPCG first heard of the planned operation by letter, but wasn’t consulted about it.

Following Jasper’s blog post, which appeared yesterday, Lambeth council officers and police had an emergency meeting this morning to discuss plans for the event.

Jasper continued: “The whole think smacks of… well it’s hugely disproportionate. What happens if one kid kicks off in central Brixton?”

Lambeth council’s cabinet member for community safety, Jack Hopkins, was angry at the comments made by Lee Jasper. Hopkins said: “We’ve already run this kind of operation before and people have loved it. This is the opposite of what Lee Japser is saying – it is about involving the community.

“This is about working with the Job Centre Plus and other organisations. This is about the police talking and listening to the community.

“People complain they never see their police, and here they are in the centre of Brixton in a public space.”

Speaking to the Brixton Bugle last month, outgoing Lambeth police commander Matt Bell said he was most proud of how he had listened to the community and worked in partnership with local people and the council during his two years in the borough. He was replaced by former Greenwich commander Richard Wood this week.

MP condemns ‘gross failure’ of police over death of man in...