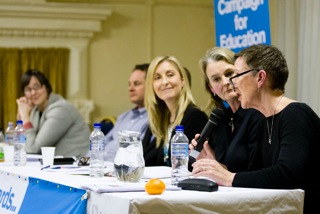 Do we want a society that values decency, inclusion, equal opportunities, kindness and community? Or do we not give a damn, and simply want the very best of everything for ourselves,  our children, our friends and family, and to the hell with the rest?

It was a great event – in part for the chance to hear a true orator, Prof Gus John, in full flight. If you arrived having no interest in education, by the time you left you would have realised the error of your ways.

Such was the passion of some of the speakers, and so disturbing were some of the revelations,  that by the end of the event you almost felt like marching straight up the road to Westminster to protest outside the Department of Education.

OK, so this was no BBC-style, Dimbleby moderated Question Time with perfect political balance.  No, this was an openly partisan event organised as part of the National Campaign for Education 2014, an initiative of  the teachers’ union NUT and Unison.

But, while their political colours were flying high, this open-to-all meeting worked hard to get as wide as possible representation of south Londoners with any stake in education. And by the way, that is all of us.

And there was plenty of diverse expertise on the panel: teacher and primary school campaigner Jess Edwards, parent and writer Jenny Landreth;  and barrister and education law expert David Wolfe, who acts on behalf of children unfairly excluded from the schools of their choice. Then there was the afore-mentioned Professor Gus John of the London University Institute of Education,  a teacher, academic, consultant, and activist whose campaigning began in earnest in 1964 when he arrived in England from Grenada to find education policy under the baleful and racist influence of  the eugenics lobby  – Eysenck, Jensen, Burt, etc – and quickly became a leading campaigner against their IQ-testing methods.

And finally, Lib Peck, Leader of Lambeth Council, was the only politician on the panel. Although she might figure as a member of  “the establishment”, Lib spoke with complete frankness about the damaging impact of  this Government’s funding cuts and its current  education policy, on education provision in the borough.

She was proud of Lambeth’s recent record on improving schools and admissions over the past six to seven years: “We are able to offer places to many more parents who apply… now we have about 90 per cent getting first or second choice”.

But she condemned Education Secretary Michael Gove’s first big decision – to cancel Labour’s school rebuilding programme,  BSF, and most of what he had done since. Which led her to the big local issue of the day (and the night) – the proposed Trinity Free School on the Brixton Hill site of Lambeth College.

As she said, free schools and academies are very deliberately not in the control of local authorities. But they have a big impact on other schools in their areas.

“They make waves …with other schools potentially drowning, or at least having their admissions screwed up”, she said.

Asked whether she would be happy to work with the proposed free school Lib said, “We don’t get any say when a free school lands here ….we have written to say we’re very worried about their admissions policy and whether they’ll be using qualified teachers in the school”.

“But our ability to change anything is limited. I do have concerns about the ethos of the school – it seems to be sufficiently different not even to embraced by the Cathoic Church – that worries me”.

“But if the school is up and running we will of course take the pragmatic view and work with them, because our duty then has to be to the pupils and residents of Lambeth. But we also know it will warp the admissions policies of nearby schools.

It was clear early on this was not going to be a good night for Michael Gove. 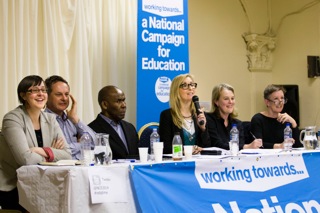 After about the tenth negative reference Mr Cameron’s Education Secretary, journalist and TV presenter Fiona Phillips, who clearly enjoyed chairing this panel, was moved to ask if anyone in the house liked Mr Gove. No-one raised their hand. A big surprise?  No? Well, there must have been some academy and free school supporters there – where was their gratitude?

But this was not just another Gove-bashing event. Generally, he was seen just as the latest  tiny figurehead on the foundering ship of education policy. As Gus John succinctly put it, “Education policy in this country has been arse-about-face for many decades.”

It was not, he said, “just a question of this bonkers fellow Gove on the one hand – everyone else on the other. When I listen to (Labour education spokesman) Tristram Hunt, I see very little difference”.

“We have to remember the purpose of education and schooling,” he said.  “The alpha and omega of education is to humanise society. All the rest has to come after that.”

This passion of his came from many decades of working with alienated  kids, mostly boys from African-Caribbean backgrounds.

His experience  helped to answer one of  the toughest questions of the evening. It came from a teacher in a south London academy school (who wished to remain anonymous) who had witnessed a year 9 class of  “challenging” black boys being left in the hands of a learning support assistant with no qualifications for their science lessons: “These boys are effectively being told, that’s the scrapheap, that’s where you are.”

What, this teacher wondered, had happened to the idea of equal opportunities? Have we given up it? Well, it seemed the government certainly has – but Gus John identified the deeper roots of this problem.

“Of the 135,000 of school-age out of mainstream schools, who are receiving education outside school  – a scandalous 66 per cent of them are black boys,” he said.

He saw schools like this academy providing “holding pens” for black boys,  as staging posts on the route to exclusion,  PRUs, young offenders institutions,  and then prisons.

It amounted, he said, to the “systematic brutalisation of the spirit of young black people.”

And only collective action by the whole of society could do anything to change this.

A question about an impending crisis in the education of children with special needs (SEN) hit a number of chords. David Wolfe, who specialises in this area, had already noted that one bit of legislation could improve the rights of SEN children who are often left stranded at 16, when the “statementing” runs out. Under a new law, statements will go and will be replaced by a scheme that will protect provision for these youngsters up to age 25.

But at the same time the whole subject of SEN education is being hit by cuts, and by the ability of academies and free schools to refuse SEN admission requests – and as Mr Wolfe explained, the widely-desired integration of SEN into mainstream schools was much more expensive than sending these children to separate special schools.

And that additional cost falls onto local authorities already strapped for money. So what will Lambeth do? “We are trying to change our approach…we’re working very closely with parents, to draw on their experience…with the aim of getting their children into mainstream schools.”

“But we can’t deny there are cost issues for us that are not going to go away, they’re going to get worse. Lib Peck confirmed that their SEN budget would go down by 50 per cent from 2010 to 2016.  Once again, Gus John had the best soundbite: “Every child matters means every child matters. Not just if they’re able-bodied.”

The role of private schools in the Government’s vision came under a lot of scrutiny. One young teacher who herself went to a state comprehensive, then to Oxford, wondered why education policy is being made by people with experience only of public school and Oxbridge? After Oxford, she had realised just how narrow the worldview of many of her fellow alumni had been, and yet they got the top jobs in government.

Given Mr Gove’s love of the public school ethos and his determination we should all try to be a bit more like them – what was so good about them really? This was one of few questions that left the panel scratching their heads for answers. “Big playing fields and swimming pools”. “That sense of entitlement.” “Money”.

There was the irony that as state schools were being told to adopt the practices of public schools, so these fee-paying institutions were picking up on some of the best innovations from the state sector – especially in the areas of arts and creativity.

So what do we do about them? “Abolish them. It happened in Finland in 1971, and now they have consistently one of the best education systems in the world.” Much applause.

And finally, a question that chimed well with the inclusive atmosphere of the Karibu that night, from Ellen Lebethe of Lambeth Pensioners Action Group: what part should pensioners play in education, and how can they get involved in this campaign?

Jess Edwards said that on 8 March there’d be an NUT Stand Up For Education stall in Brixton and it would be great for pensioners to come down and help spread the message. Gus –himself a pensioner – was amazed how all the expertise and knowledge of these older generations was wasted, shunted into a corner. In Hackney, when he was a director of education, he had shown how valuable older people could be in schools, for example to teach children about the history of immigration, the history of the city, their lives and experiences.

There were many more questions, and more were arriving via twitter as the event went on.

Overall, the sense of controlled anger and real excitement within the hall conveyed a feeling that we might just have witnessed a key turning point, a point when the community realises it is a community and has power. Let’s hope – or more to point, let us act! 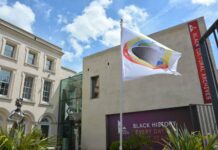