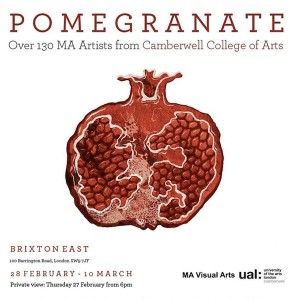 This Thursday March 6th one of London’s best film clubs, Aorta Burst, comes to Brixton as part of Brixton East gallery’s Pomegranate exhibition, featuring over 130 MA artists from Camberwell College of Arts showcasing their work. I spoke to Aorta Burst Film Club founder Joe Mulleady about the event and legendary Hollywood artist and one time Brixton resident John Decker, whose life will be examined on the night.

Can you explain to me how Aorta Burst Film Club first started?

Well I’ve always been drawn to the less mainstream side of film, and I always enjoyed screening odd films around my house for friends and forcing my knowledge onto them, and it was those friends that suggested I should start my own film club. But I never thought it was something I could do, I couldn’t see myself just standing in front of a room full of strangers talking about things. But then I decided to just take the plunge. So I contacted The Roxy in Borough, who I used to deliver beer to, I pitched my idea for a film club, and they said if you could get thirty people in to see your film then you can do what you want. Somehow I managed to do it, and it worked, and it was an amazing night, and it’s gone on from there.

I always wanted to do more than just sticking on a film, for whatever reason, and have people just turn up and watch it and then go home. I always wanted to turn each screening into a memorable experience, which is where the intensely researched introductions and clips come into it. The name Aorta Burst is meant to express the fact that there’s so much passion for film building up inside me that it makes my heart want to explode. Well, that and I just thought it sounded really cool. It’s also about finding films that people wouldn’t necessarily be aware of for whatever reason, either they’ve been forgotten or neglected or there’s been issues with the studios, or they’re from other countries. It’s always focussed on what I’m interest in at the time.

There is a kind of a thread running through most of the films I’ve chosen to screen, mostly involving obsessive individuals or people who had things gone differently for them they would have been hailed as creative geniuses, but for whatever reason, be it their own failings, or the failings of others, they’ve been left unappreciated.

So what would you say is the main objective of your film club?

The main objective is to have fun, because if it’s not fun and interesting then there’s no point in doing it. It’s about raising awareness of all these forgotten films and also showing there’s an alterative out there to just turning up and watching whatever kind of crap is on at Cineworld.

I enjoy history, which I studied for a while, and there’s a kind of historical aspect to looking through what people made and why they made it and what kind of cinematic trends were happening at certain times. I look as deeply into each film as I possibly can and learn as much as I can so I’m able to give an entertaining and informative talk on it before it’s shown, and hopefully it leads people on to other things, maybe things they didn’t realise existed.

So what can audiences get from a film club screening that they won’t get from a run of the mill cinema?

At a film club it’s someone showing you their passion and for whatever reason they feel they need to show these films. Instead of merely watching a film you’re likely to find out why it exists. You’re experiencing someone else’s perspective on things. With the best film clubs it’s always very personal. They’re picking things to show that mean a lot to them. It just gives a different perspective of things that you might not find anywhere else really.

So what can people expect from an evening at Aorta Burst?

You should expect to learn something whilst being entertained. I try to be light hearted without being flippant. I’m showing things I care about, but fun is mostly the aim of it, and to prove to people that you can just go out and have a good time watching cinema and not have to over analyse everything.

I take a very personal and in depth approach to screening a film. I like to draw people in. This isn’t the professional clinical environment that you might find at film school. I went to film school and it was mostly upsetting. I like to think that the screenings I organise are somewhere you can come and chill out and bond over things.

Can you tell more about the event that’s happening Thursday?

I was asked me if I wanted to put on a film screening that could link into what they’re doing, so I’m going to be doing the kind of clip shows that I usually feature, the usual sort of insanity, and anything else you might expect. It’s going to be a very odd look at illustrators and artists in film, many with murderous intent, maybe some dancing in there, maybe an ape or two, depending on what I can dredge up, and then you can come along and look at all of the art that’s on display. I’ll also be talking about artist John Decker who made a name for himself as a Hollywood painter during the 1930s and 40s.

Can you tell me a bit more about John Decker?

John Decker is a guy whose life itself is like a wonderful melodrama. If they made a film about him it would be far more interesting than any other film I could ever screen. He had a very traumatic childhood.

He eventually got himself work as a painter creating backdrops for various theatres, which then got him into the Slade art school, where he hung around with various psycho-sexual luminaries. He then became interned in the Isle of Man for being a potential German spy, fled to New York illegally – he stowed away on a ship – got work as caricaturist, then went to Hollywood and became friends with all these legendary boozers.

He painted portraits in numerous styles, he was an art forger, he was a bigamist with numerous wives, and a fascinating alcoholic artist. He had a lot of deep-rooted problems as a child that plagued him throughout his adult life and the only way he could escape was through painting and drinking. He’s incredible.

He went on to work in set-design and became famous in Hollywood during the late forties just before his death, and that’s the first time he found proper wealth in his life, which he frequently squandered. The more popular he became, the more successful his exhibitions, the more people that wanted his art, then the more he became completely bored with it all.  He invested a lot more in having a good time and having friends and forming relationships then he did in creating lasting pieces work.

Which films are you screening?

I’m screening Fritz Lang’s Scarlet Street, a 1945 film noir in which Edward G Robinson is a bank clerk and a struggling artist who ends up falling for a woman who takes advantage of him, and is selling his paintings without him knowing. John Decker supplied all the artwork in the film. He didn’t do it for money or recognition, he did it because he was bored and it kept him occupied after the death of a lot of his friends. They’re very dark and menacing images.

One of the problems with Decker is a lot of his work he painted under different names and a lot of his art is lost, stolen, or destroyed. Nobody knows where a lot of it actually is, and it’s very hard to find any images of his work anywhere. Many of his forged pieces are hanging up in galleries as legitimate works of art and have been sold for millions and no one is quite sure what’s what. So this film is a chance to see his actual artwork in films. I will also be showing some clips from the two other films he did which both came out after his death, The Two Mrs Carrolls starring Humphrey Bogart and a prison drama called Brute Force. Whenever I start talking about him I always go off on a tangent because he’s ridiculously interesting.

So what’s in store for anybody thinking about turning up on Thursday?

You’re going to come along and not only get to see a film that you may not have heard of or may not have seen, and it’s a very good film, and you’re going to learn about John Decker, a fascinating man who has roots in Brixton. You will also get see work by up and coming artists, hopefully one of whom out of a hundred and thirty will have a life as maddening and as exciting as Decker, but perhaps with a happier ending. Plus I’m going to be showing a lot of off the wall clips that will enrich your life as never before. That last comment may not be true, but it will be a good night.