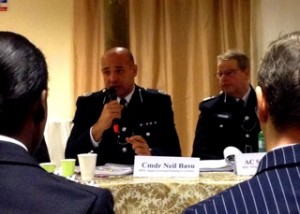 It’s more than 30 years since the Brixton riots of 1981, sparked by police treatment of young black people on the streets of Brixton. Three weeks ago, a jury reached the verdict of ‘lawful killing’ in the case of Mark Duggan and many in Brixton have been asking the question ‘when are the police truly going to change?’

Commissioner Byrne said the police were working hard to make things better, to improve communication, to show greater accountability and to train police better in community relations. The Brixton audience was not convinced. During the course of a sometimes angry, definitely impassioned meeting, speaker after speaker said nothing had changed.

“When are we going to see a prosecution?” “Why if a young person shoots someone in the street do they go to prison but if a policeman shots someone – nothing happens?” “How can we have confidence in an institution that can’t hold people to account?”

The police officers on the panel tried their best but it soon became clear that one issue in particular remained a grievance – the Met’s attitude to Stop and Search, which gives police the power to stop and question anyone on the street they suspect of a crime. Statistics have shown that police are much more likely to stop and search black people.

One of the civilian panellists at the meeting, Professor of Education Gus John, said he had a “sense of deja vu” that Stop and Search and similar issues were still as toxic today as they were decades ago. He was not the only one. A questioner who identified himself as Rashid said he felt “resigned” to the status quo. “Don’t you feel embarrassed?” he asked the police. “Don’t you feel ashamed?”

Among the police officers on the panel was Lambeth’s Borough Commander Matt Bell, who heard Stafford Scott, a consultant on racial inequality and friend of the Duggan family, denounce the Independent Police Complaints Commission for its handling of the Duggan shooting. He said the IPCC had acted as a ‘shield of the police’ and described what he saw as a widespread lack of trust in the police among the black community. That remark brought some of the loudest applause of the night.

By the end of the event it was clear where everyone stood. The room had filled from 50 at the beginning to about 80 attendees at the end. Credit to the Metropolitan Police for coming to speak and to listen. The Brixton voice certainly came across loud and clear. Let’s hope there are more events like this because if things are ever going to change, as speakers on both sides acknowledged, it will be by talking openly and honestly, face to face.

Help a student with your views on Brixton gentrification

0
Are you a Brixton resident with two minutes to spare to help a student complete her A-level...