Brixton’s pub landscape is as wonderful as it is diverse. We’ve recently made a series of features on just a few of the remarkable pubs on offer – so here they are all in one place to ease your pubbing pleasure! Click the links to read more. 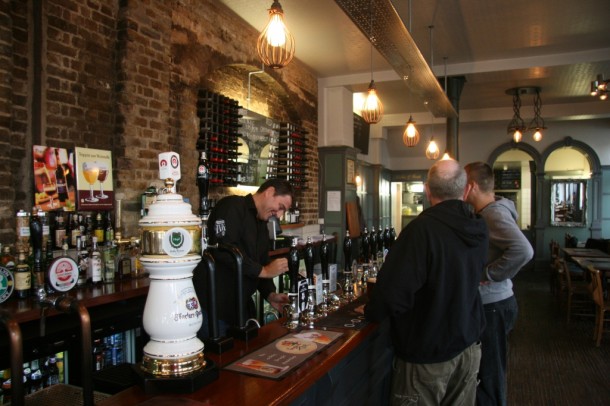 Arts Editor Barney Evison caught up with Neil Warshow, who has been the Beehive’s licensee for 7 years, to find out what it’s like running a pub in the heart of Brixton.

The Fitzgerald family has been running the Canterbury Arms, the long-standing Victorian pub nestled behind the Rec, for over 20 years. We caught up with the Fitzgeralds to find out what it’s like behind the bar.

At just over one year young and with a Timeout “Best London Pub 2013” nomination already under its belt, the Crown & Anchor pub on Brixton Road has established itself as well-stocked gem of a boozer with locals. Tom Dowson investigates.

The Hootananny is a Brixton institution. Arts Contributor Harriet Hall met Sophia Yates, who owns Hootananny with her brother, and is involved in every element of the business.

Built in 1850, The Trinity Arms is named after the Trinity Asylum on Acre Lane, which was founded for poor women who professed belief in the Holy Trinity by Thomas Bailey. It is a landmark that has survived the Blitz and is a much-loved watering hole for old-time locals, young professionals, couples and gig-goers alike. Arts Editor Ruth Waters met Becky Sawyer, manager of The Trinity Arms.

Matt Ward & George the dog have been the landlords of new-age community pub The White Horse for the past 7 and a half years. Arts Contributor Hayley Dean interviewed them for the Brixton Blog and Bugle Pub Special.

The Windmill pub sits just a short walk from its namesake to the south of central Brixton, and is well-known to new music lovers across London. Arts Editor Barney Evison caught up with Tim Perry, the pub’s discerning band booker, in the Windmill shed under a noisy September downpour.

Decades of Brixton: growing pains of the noughties

Estate agent applies for change of use to turn Canterbury Arms...