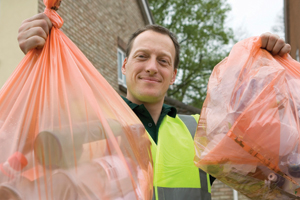 Councillors have approved plans to bring in smaller wheelie bins and food waste collections for Brixton residents, in a bid to cut the amount of waste that is produced.

Residents will be given new waste bins that are just over half the size of the current wheelie bins. For people living in houses converted to flats the bigger bins will remain, but some will be removed so that they are shared between more households.

From October, all low-rise households will also be expected to use two new food waste bins, a small indoor one and a larger outdoor one. These will be emptied once a week, although households will have to buy their own liners for them.

A council report also revealed plans to avoid removing recyclable items that were placed in waste bins – this measure would be introduced “after a reasonable period for adjustment and education”, it said.

The report said Lambeth residents put 9,500 tonnes of recyclable material into refuse bins every year, with the borough lagging behind other London areas for recycling rates.

At the council’s cabinet meeting on Monday evening, deputy council leader Jackie Meldrum said there should be a “flexible” approach to the new bins, adding that large families should be able to keep bigger bins if they needed to.