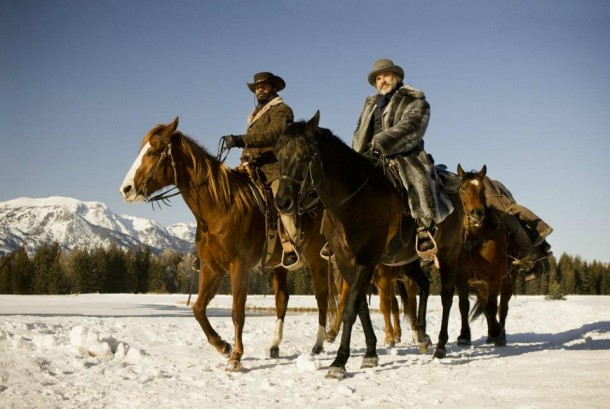 With Brixton freezing under a blanket of snow, the Blog’s Robert Makin headed to the Ritzy Cinema to defrost in front of a rather warmer Wild West…

Texas, 1858: whilst being transported from one plantation to another, the ruthless captors of slave Django (Jamie Foxx) are killed during a violent confrontation with part-time dentist and full-time bounty hunter Dr King Schultz (Christophe Waltz). Schultz frees Django on the condition that he helps him identify wanted outlaws the Brittle brothers, Django’s previous tormentors. In turn Schultz agrees to train Django in the art of killing and help him find his wife, Broomhilda (Kerry Washington). A blood drenched and brutal journey that eventually leads them to the sadistic and merciless Calvin Candie (Leonardo DiCaprio) and their deadly fate.

Much like Kung-Fu movies, Spaghetti Westerns are an acquired taste. Unlike the American films that inspired them, they hardly ever involved good guys standing up to bad guys in the name of traditional American values. They were cynical, filled with gallows humour and had a complete disregard for their original source, with subtexts often reflecting Italy’s political turmoil. They were also extremely violent and gave audiences what they wanted; revenge!

Sergio Leone’s The Good, The Bad And The Ugly (1966) may have become the sub-genre’s most revered film, but Sergio Corbucci’s Django (1966) became it’s most notorious. Featuring a scene involving a priest having his ear cut off then being made to eat it before being shot (because eating your ear just isn’t torture enough obviously) it was immediately banned in the U.K up until the 1990’s. But the coffin dragging man of mystery became an iconic figure and spawned literally hundreds of unofficial sequels. Inspired by the spirit of Corbucci, Tarantino’s Django Unchained does fit perfectly within this odd series of bootleg westerns (which includes Mike Takeshi’s demented 2007 Sukiyaki Western Django starring Quentin Tarantino as gunslinger Piringo) and its twisted mythology.

In fact I was surprised at how much of a western Django Unchained actually is. I can’t remember the last time I saw America’s vast, desolate and harsh landscape captured so majestically on film. At its core is a fantastic and gripping action adventure that aims to create an atmosphere of historical accuracy. At the same time it has a lot of fun playing with western conventions, to the point where some of the early scenes could have been straight out of Blazing Saddles (1974).

Tarantino’s signature inventive approach to story structure has given way to a straightforward and solid narrative populated with some his most memorable characters to date. Django is a sympathetic and fully fleshed out hero you can genuinely root for, Dr Schultz is a unique mentor devoid of genre stereotyping, and Calvin Candie is a suitably sinister and genuinely unnerving villain, giving DiCaprio a role where he actually looks like an adult. Don Johnson’s Big Daddy goes home with one of the funniest moments, and an almost unrecognisable Samuel L. Jackson is finally allowed to do more than just shout m***** f***** a lot (although he does that too). The only one who misses out is Kerry Washington whose performance deserves at least one of those brilliantly written monologues Tarantino has become known for. Considering her presence lays at the heart of the film the director could have at least given her some meaty dialogue.

But the most disappointing aspect of Django Unchained is how the last act collapses under the weight of the first engrossing part, leading to an unsatisfactory conclusion. First of all there’s the sudden appearance of modern music that’s essentially jarring and makes everything look like Mario Van Peeble’s Posse (1993) or Young Guns II  (1990). And it only gets worse with an epilogue involving Quentin Tarantino dressed in a fancy dress cowboy costume pretending to be an Australian and Jamie Foxx, our hardened hero, on a dancing horse. Saying that it is the most emotionally engaging film Tarantino has ever made and it’s definitely a movie of epic vision created to be enjoyed in a cinema, as appose to on a phone, laptop or an I-Pad. It’s just such a shame it becomes so ludicrously derailed during the last moments.

Django Unchained is showing at the Ritzy Cinema, Windrush Square, at 1.30pm, 5pm and 8.35pm this week.

A central part of Brixton …