Streatham Redskins battled hard but were unable to overcome a strong Chelmsford Chieftains side in front of a vocal crowd at Planet Ice Brixton on Sunday evening.

A third period fight back was not enough to save the game for the Redskins as they went down 6-3 to the reigning play off champions.

Despite a good opening for the Redskins it was Chelmsford who got the first goal of the game with under three minutes played. Gary Clarke passing the puck to Tom Castle on the net and the subsequent shot bounced back off the underside of the bar and in off goalie Will Sanderson.

It was a harsh blow for the Redskins but they almost hit back straight away as Joe Johnston skated through the middle of the defence only to see his shot saved by Chieftains stopper Ben Clements on the one on one.

Former Chieftain Jakub Klima had a good chance himself to score past his old side a couple of minutes later however Clements made a big save and then somehow kept the rebound out with his stick. 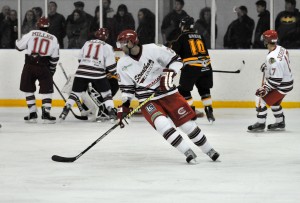 Streatham had the bulk of possession at this stage but Chelmsford unlocked their defence again on the ten minute mark as Michael Ranby skated hard into the offensive zone before dropping the puck back to the on skating Julius Sinkovic who fired low past Sanderson and into the net.

Streatham kept going but could not find a way past the increasingly confident Clements in the Chelmsford net.

With five minutes to go there was controversy as a Chieftain appeared to be holding Liam Rasmussen’s stick and when the Streatham winger yanked the shaft away its momentum took it straight into Sinkovic’s face, who was standing behind. Rasmussen was given a penalty and Chelmsford’s well drilled unit made no mistake with Player Coach Clarke scoring a beautiful one timer from a Grant Bartlett pass.

The second period saw the visitors step up the pressure on the Redskins as Sanderson was called into action on a number of occasions to save his team.

The hard skating Chieftains forwards were rewarded for their efforts as Ross Brears was given a penalty shot after being tripped whilst through on goal. Brears made no mistake with the subsequent penalty shot and with only seconds remaining in the period, Hammond wriggled through the static Redskins defence and finished into the bottom right hand corner of the net.

At 5-0 down going into the third period, Streatham were simply playing for pride and they came out strongly at the start.

Klima intercepted a stray pass from the Chelmsford defence with only fifty seconds gone and passed to Joe Johnston who fired high into the top corner of the net.

Streatham continued to pressure and Klima again was unlucky with another effort and Stevie Balmer also tested Clements from close range.

It was Chelmsford who scored next however as Hammond got his second of the night after Schneider set him up.

Streatham dug deep and three minutes later the hard working Klima pressured the Chieftains defence who were on a powerplay at the time and intercepted a pass before skating in on Clements and finishing smartly.

Streatham and Chelmsford both had further chances to score however it was the Redskins who got the final goal as a big shot from Hopkins on the blue line was tipped in by Adam Mahoney on the power play.

Streatham salvaged a little pride with their showing in the third period but Chelmsford were the stronger team across the whole sixty minutes.